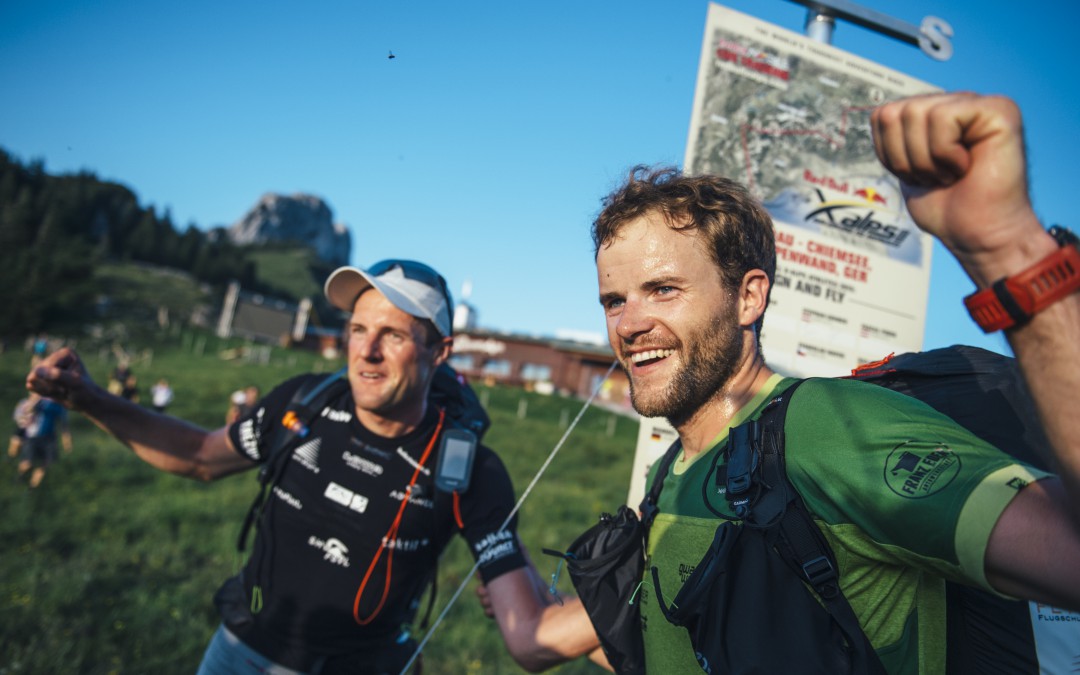 If the Red Bull X-Alps were a Formula One event, we would say: Of course, old Ecclestone had his hand in it – that’s what made it so exciting. One day after Christian Maurer and Sebastian Huber reached goal, four pilots battled for the third place on the podium. This breathtaking finish was just the logical following of an exciting start of the 2015 Red Bull X-Alps in Salzburg, Austria on July 5. That Sunday was a fantastic flying day with flights of epic dimensions from the Gaisberg mountain past the Dachstein turning point, nearly reaching the skywalk turning point at the Kampenwand mountain in Germany. It was clear on the first day that this year’s race would not turn in another one-man victory march of three-time champion Chrigel Maurer. The two skywalk pilots Stephan Gruber and Paul Guschlbauer stepped on the gas and kept pace with Chrigel on this fantastic day. Stephan even managed to be the « day’s winner » and was the first to give his autograph to the sign-in board at the Kampenwand. 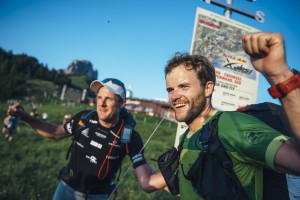 At the next turning point in Lermoos, Austria, at the foot of the Zugspitze mountain, Chrigel Maurer was the first to arrive, followed closely by Paul and Stephan. Selective conditions with a northerly foehn then pulled the pack apart. Yvonne Dathe, one of two female athletes in the race, was eliminated on the third day in accordance with the race rules despite her excellent first-day performance in the air. By the fourth day it became clear that another rookie would play a decisive role: Sebastian Huber, a young German pilot from Lower Bavaria flew into second place in Italy. His excellence flying skills and phenomenal running performance helped him to secure second place overall at the end of the race! Czech pilot Stanislav Mayer and Swiss pilot Michael Witschi also flew within striking distance of the lead. By days 5 and 6 the leading group was still close together and Chrigel Maurer was unable to break away like he did in previous races. Paul and Stephan took advantage of the enormous glide performance of their X-ALPS2 gliders again and again on long transitions, winning respect from other pilots. The RANGE X-ALPS harness flown by Paul, Stephan, Ivan Colas and other athletes also proved its mettle. The fact that Peter Müller, developer of the RANGE X-ALPS and Alex Höllwarth, designer of the X-ALPS2 glider are both passionate hike & fly fans as well as ambitious XC pilots is clearly reflected in these two products. The Red Bull X-Alps 2015 weren’t just a showcase for long flights and phenomenal ground performance; they were also the scene of a few mishaps. Michael Witschi had to throw his reserve chute and landed in a lake. Toma Cononea broke an arm and lost a tooth. Michael Gebert quit the race after conditions became too difficult to proceed. Tom De Dorlodot was also forced to give up due to injury. In any case, at the final turning point in Annecy, Chrigel held just a small lead over Paul. Following Chrigel would have secured a second place finish as Sebastian Huber still trailed by a good distance. In this situation Paul decided to go for victory and chose a route much further to the west than Chrigel. But this tactic didn’t pay off. Strong west winds forced Paul to hike while Chrigel gained kilometer after kilometer in the air. Sebastian was also able to pass Paul and arrived in Monaco in second place. Suddenly the race for third place was wide open – a finale like the Red Bull X-Alps have never experienced. On the last day Paul began the trek to Monaco simultaneously with a trio made up of Aaron Durogati, Gaspard Petiot and Antoine Girard. But at what price? Because of his longer route, Paul only had one chance to use his night pass and hike through half the night to gain a slight advantage of about 10 km on this final day of the race. The next day the trio flew as a group and this worked well at first. Paul’s lead grew at the beginning, but then shrank drastically. In the afternoon, former PWC champion Durogati took a clever shortcut and was suddenly hot on Paul’s heels. As Paul suddenly had to land on the leeside of a mountain just 20 km short of goal, the race appeared to be over for him. Durogati managed to scrounge some new thermals and flew past Paul! Petiot was also suddenly back in the game just behind Paul with plenty of altitude while Girard slipped back further and further. Paul freed his glider from the maquis shrubs and sprinted with his gear bunched up a few kilometers to ravine where he was able to launch again. At the same time, Durogati bombed out in a tributary valley and continue on foot at breakneck speed. Paul thermalled up directly in front of launch and flew east on a direct line to goal with the cards newly dealt. Petiot was also on a direct line to goal slightly behind Paul but high enough and quickly caught up while Paul lost time on his easterly route. A few kilometers short of goal Paul was forced into the bushes again, but extracted his gear again and set off on foot. Petiot was still in the air and scrounged a leeside thermal that shot him skyward at 4 m/s! That surely would have meant victory, because with a few hundred meters of altitude to his advantage he would have been able to glide over Durogati and Paul and reach goal in the air… But there was plenty of drama left. Shortly after Petiot thermalled over the ridge, he was flushed down just as quickly and forced to land – just 3 km behind Paul! Meanwhile Durogati was perhaps 8 km from goal and the finishing order seemed to be Paul in third place, Petiot in fourth and Durogati in fifth – as long as no one made a wrong turn or injured himself. Paul ran like the wind and with a sensational performance secured his third place in the Red Bull X-Alps 2015! But let’s not forget Girard, who was still flying and managed to land a few minutes behind Paul to make fourth place – in front of Petiot and Durogati! What an exciting finish for these four athletes on this memorable day! If this had been a movie script, it would be considered overly dramatic and no one would believe the story… But this is how it really happened and we were there! Stephan Gruber managed to finish his debut race in 19th place while Ivan Colas had to quit the race due to injury. The entire skywalk team is unbelievably proud of its athletes Paul, Stephan and Ivan, but also of all the others who rose to this challenge. We can’t wait for Red Bull X-Alps 2017!