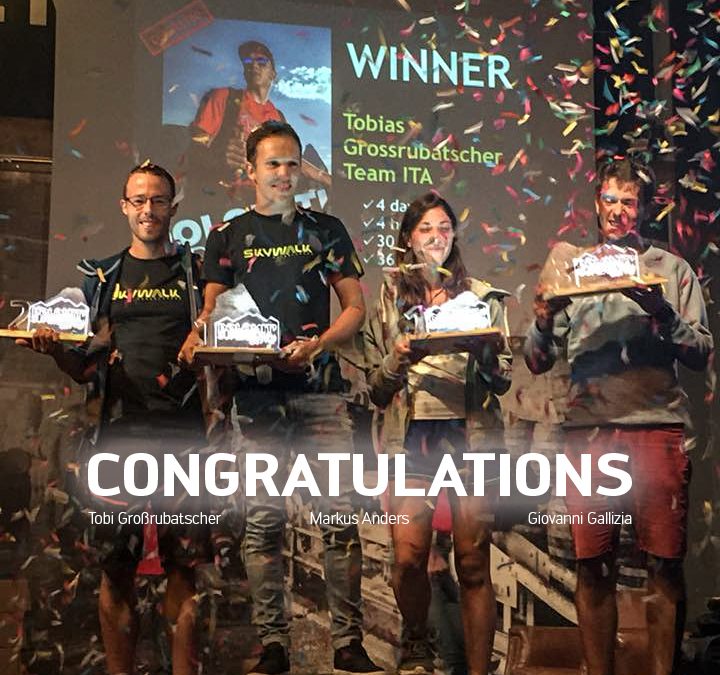 The 2nd edition of the Dolomiti Superfly took place from August 26 to September 1, 2018. Like last year, the route started in Levico Terme, then followed a circular course right through the Dolomites via Canazei to Sexten, and then back over the Cima Grappa. This left variations open in all sections, ultimately leading to a very exciting race.

In the end it was Tobias Großrubatscher to catch the first place! Close behind him was Markus Anders, who was only 10 minutes later than Tobias. On third position Giovanni Gallizia reached the goal. We´re proud of all athletes for this sensational performance! Tobi, Markus and Giovanni were all flying our X-ALPS3 and our RANGE X-ALPLS2. 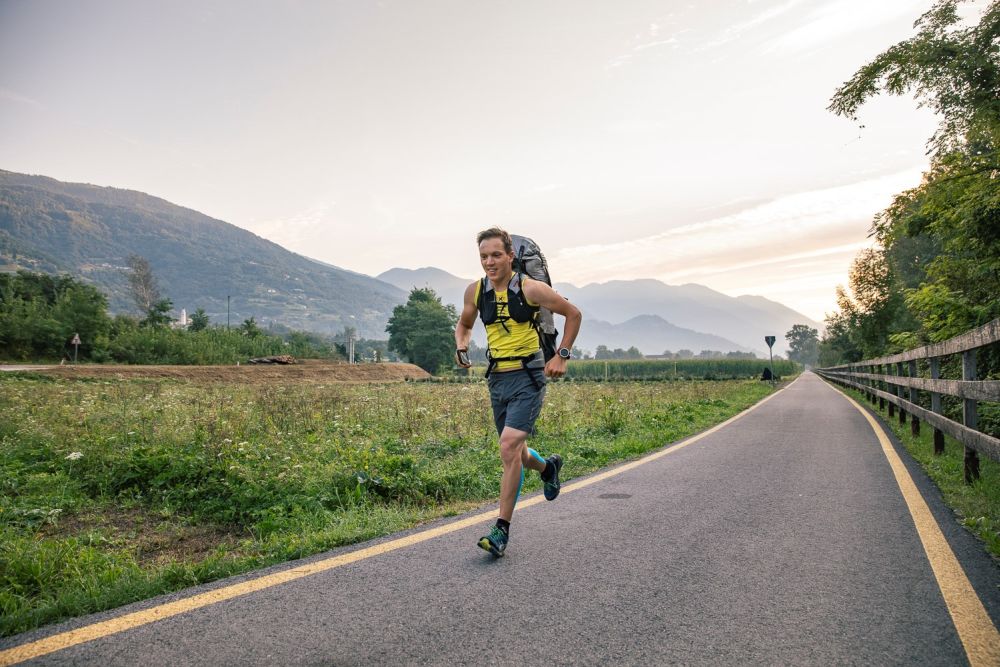 Most pilots decided just to walk towards Canazei, while I and another 5-6 pilots believed that it was flyable. It was indeed and we were able to fly a few kilometers. But at the last chain of mountains, it was over for everyone.

I decided to go even further into the mountains and hoped that the wind would subside and that I could make a glide down to Predazzo. But that was not the case, so I was stuck way back in 28th place. 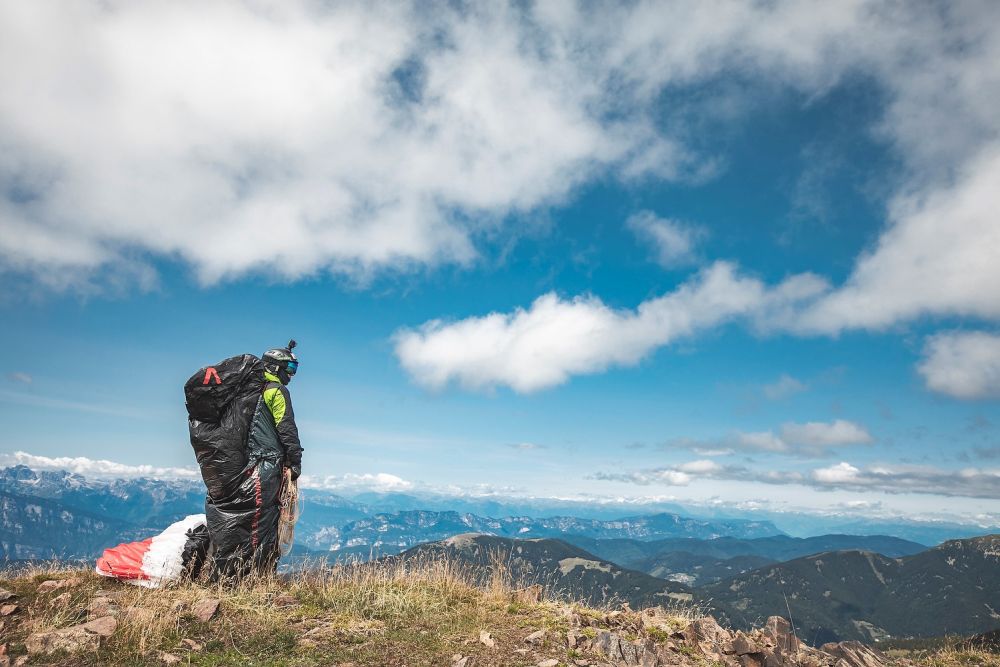 The first day was rather frustrating for me as I was far behind while most had passed Predazzo and continued on foot.

I decided to fly again and hoped that the thermals were strong enough so that I could catch up.

Launched at Alpe Cermis, but nothing really worked until Predazzo. It was so tough that I got to know nearly every tree by heart. Two pilots dared to fly low up the valley, but I decided to top land on an alpine pasture below the Latemar and to hike up, which was possible. This was the best decision because from there I flew to Canazei. There was no time to lose, so I quickly hiked up to the Belvedere to glide down again towards the Falzarego Pass. After the glide I hiked another few kilometers, which put me in 12th place. 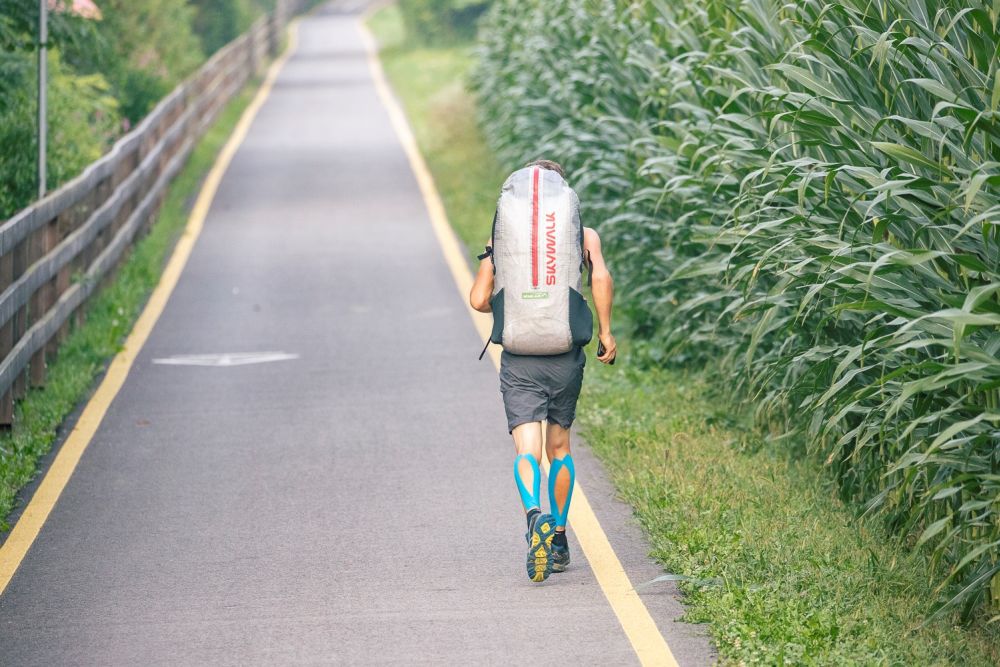 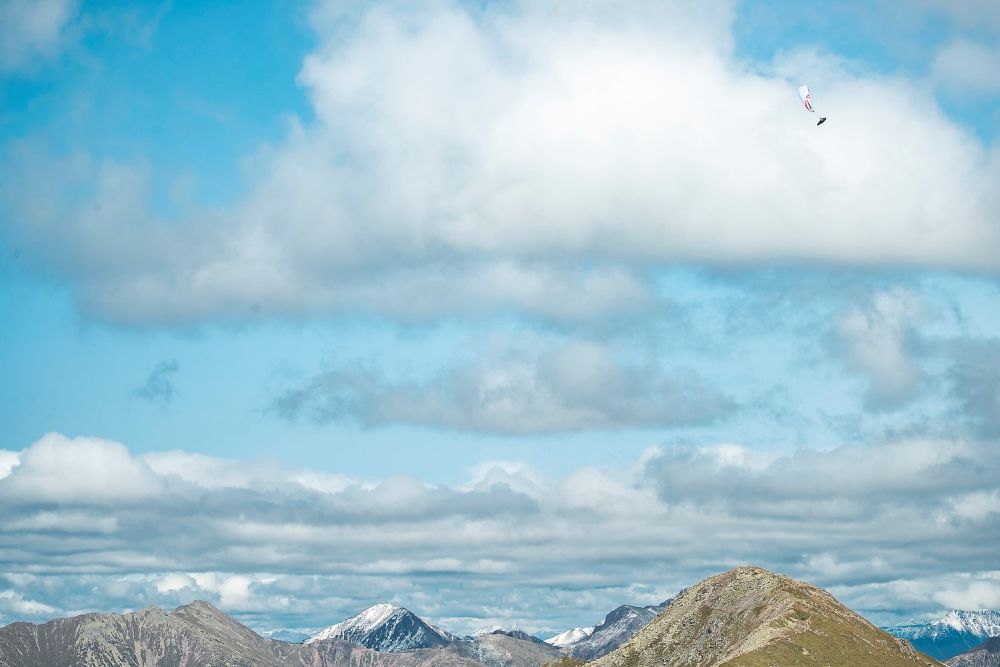 Except for the first 4 in the lead, the other pilots and I decided to hike up to the Lagazuoi and to launch from there towards Sexten. The thermals did not really set in until 11:00 am. Alois Resinger and I launched at the same and we were so fast that the others could not catch us anymore. We arrived low at Monte Cristallo. Alois had to land, but I managed to reach a rock wall and was able to climb in thermals. I continued on to Monte Piana, around the Drei Zinnen (Tre Cime di Lavaredo), and then at full speed down to Sexten where I was the second to sign in. Again, there was no time to waste, so I quickly hiked up to the Helm.

The Helm was tough, and I had to land twice. By now, many pilots had reached Sexten and were on their way up. They didn’t launch from the top, which was a better decision. I climbed in thermals to base with some of them, then conditions got better. All alone, I risked a transition into a small valley, which worked out really well, so others followed me. I climbed back up to base and flew around the Drei Zinnen again, Monte Piana, Monte Cristallo, then south to Monte Antelao and almost to Longerone.

A few kilometers on foot put me in 3rd place. 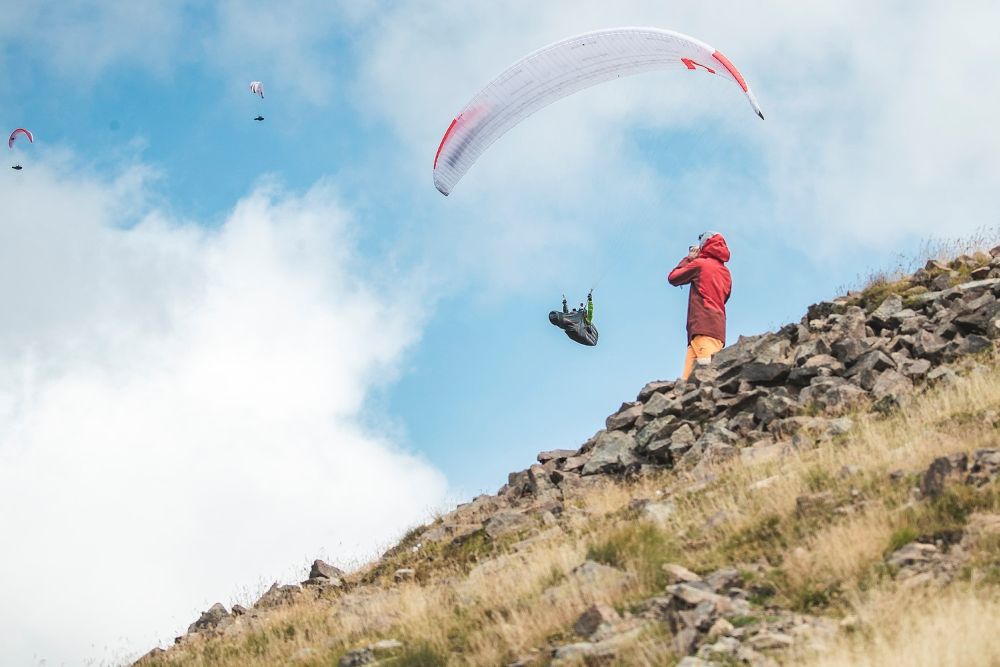 Markus, the Spaniard, and I hiked together up Monte Serva where we waited until 1:00 pm for conditions to improve. After a top landing with Markus, we quickly flew back towards Feltre, where we crossed the valley and landed high, so that we had only a few more vertical meters to climb to reach Monte Grappa. When I first arrived at the top, I briefly had a problem with a foot, but it went away, and Markus caught up with me again. Flying together, we had a long glide down to Levico, I had some luck and flew a bit further than Markus and was able to keep up by running fast.

I knew that Markus can run fast, was still fit, and trailed me by only about 1 km. For me that meant “full throttle”, otherwise he would overtake me. With an average speed of over 10 km/h, I reached goal after about 1.5 hours.

It was my first win, yeeha! 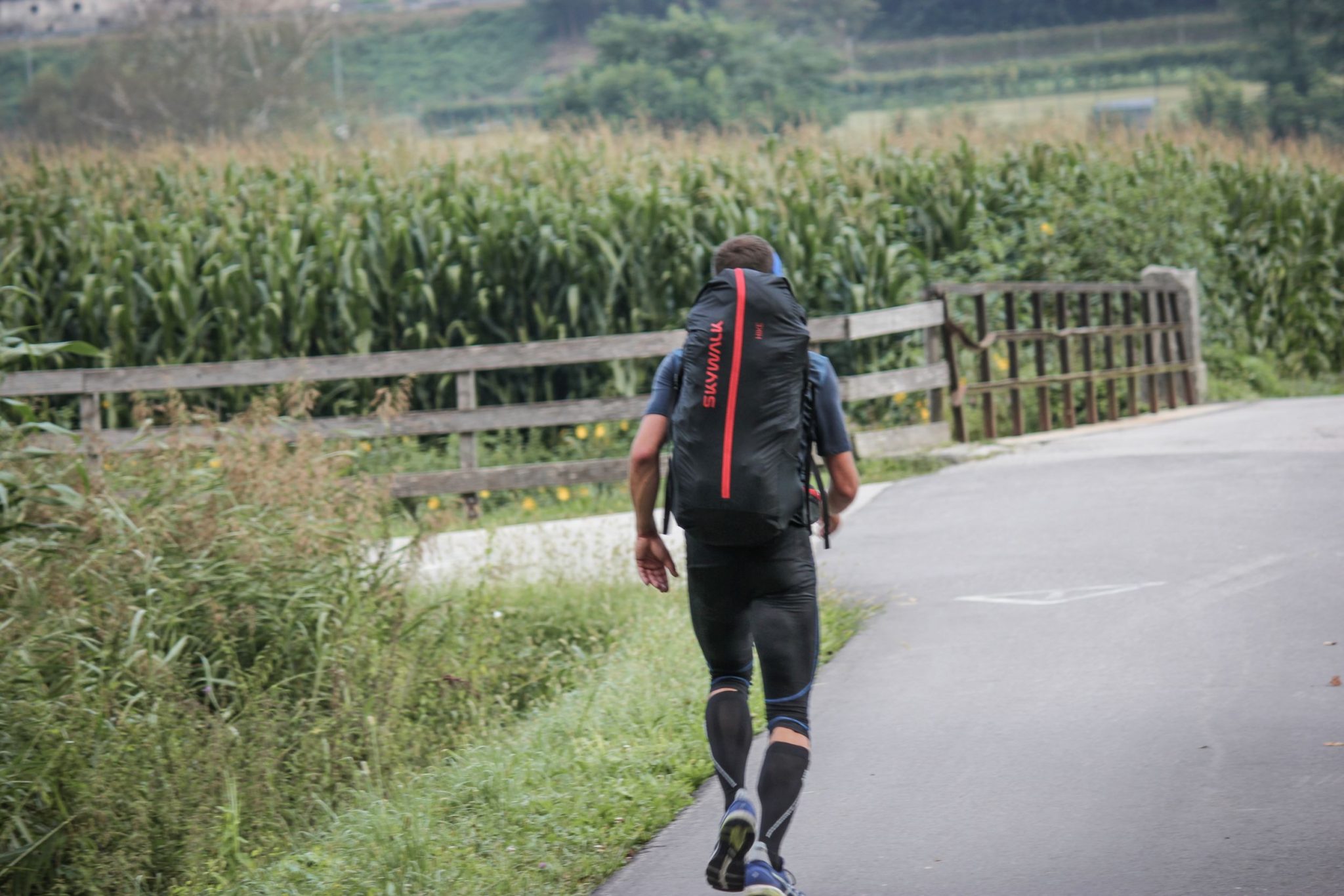 The first two days were marked by strong north wind and unfortunately did not allow long flights. But the weather provided very clear air, which offered a very impressive backdrop for hiking with the freshly snowed rock walls. With a short thermal flight and two nice flights in the evening light, I was able to position myself in a very good place in the lead on the first good flying day (day 3), shortly before the 2nd turning point. A morning flight from the foot of the Drei Zinnen (Tre Cime di Lavaredo) quickly makes you forget the climb of nearly 2000 vertical meters. 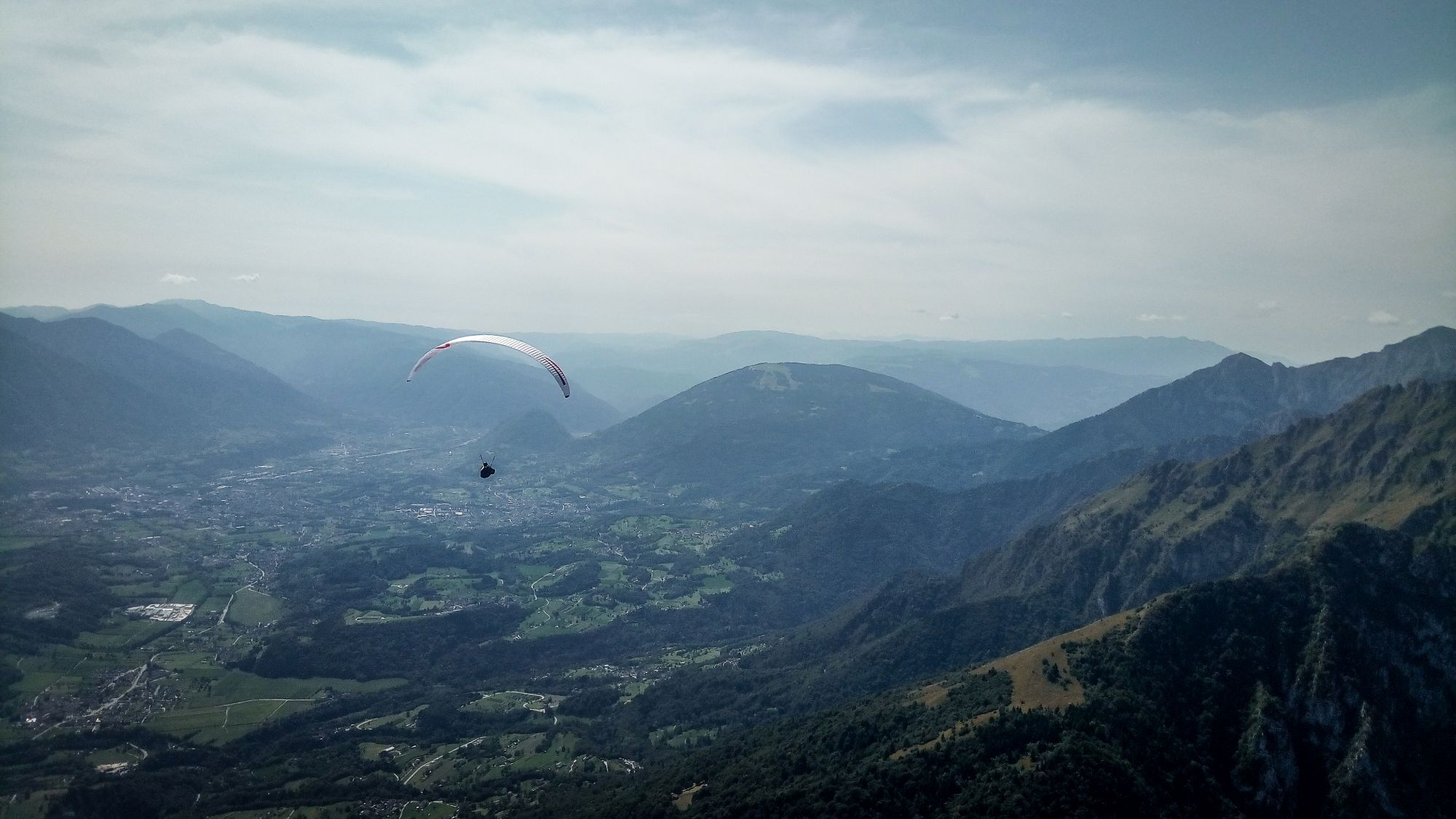 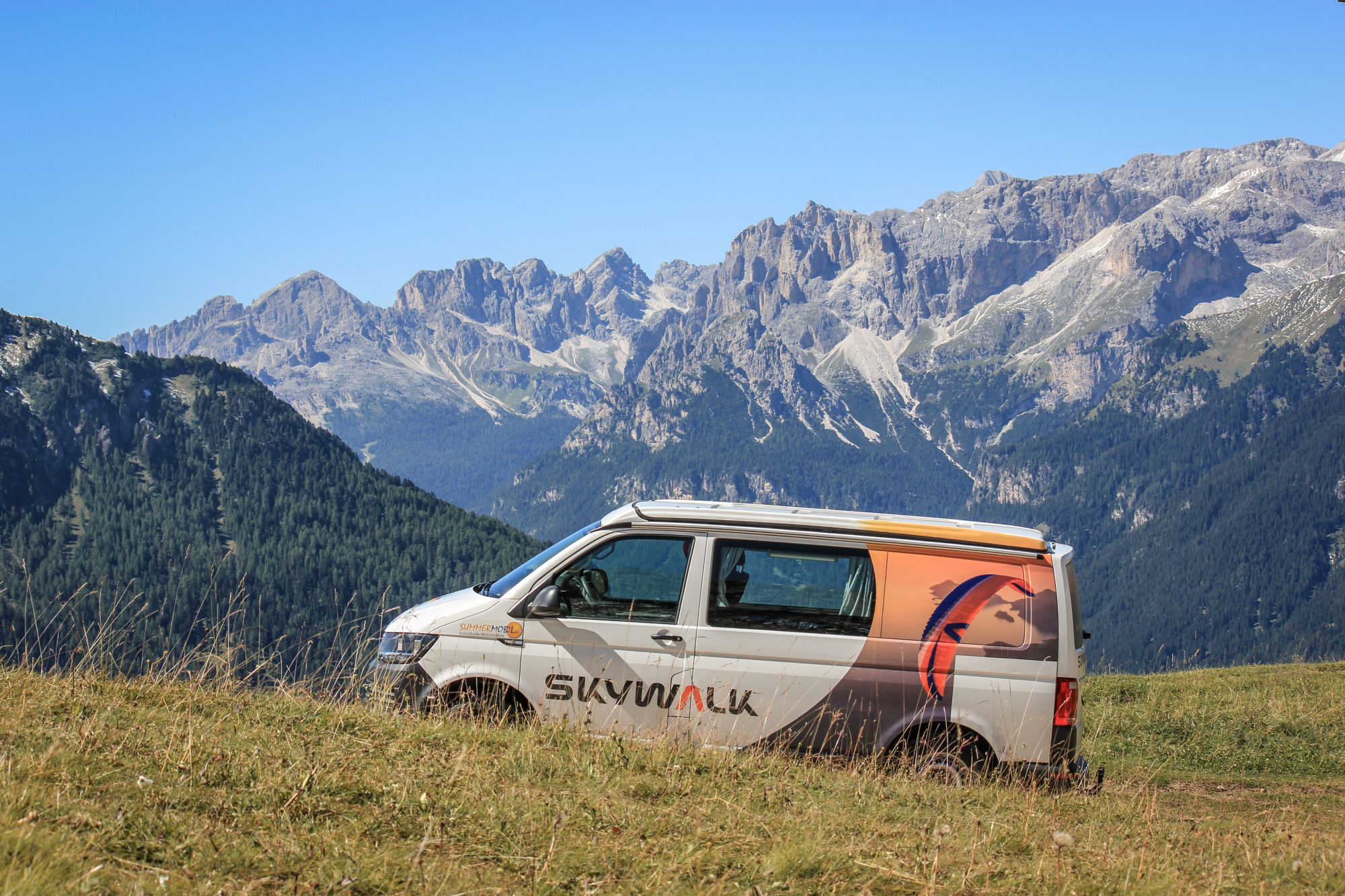 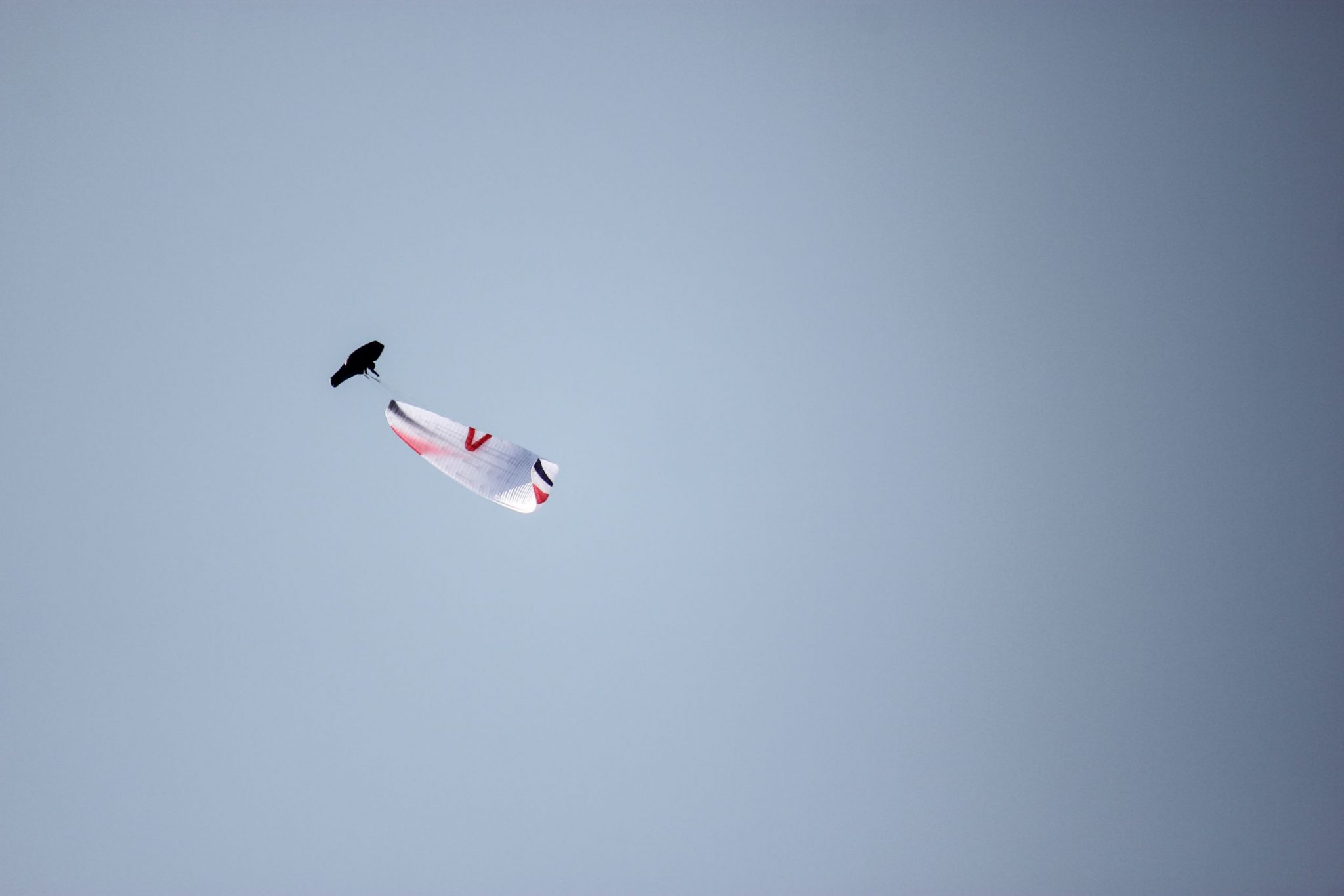 At around 11 o’clock I was able to fly around the 2nd turning point in Sexten. Without wasting any time, I continued directly to the Helm, the local mountain directly in Sexten. The route over the Dolomites did not look good at this time, so I chose the direct route to the south. The beginning was marked by a beautiful cloud street and the first valley transitions went quite well. However, after the 3200m high Monte Antelao the valley wind from the south was so strong and high-reaching that even at the summit level is wasn’t possible to use the thermals. To get to the southern edge of the Alps, a little bit of walking was necessary. 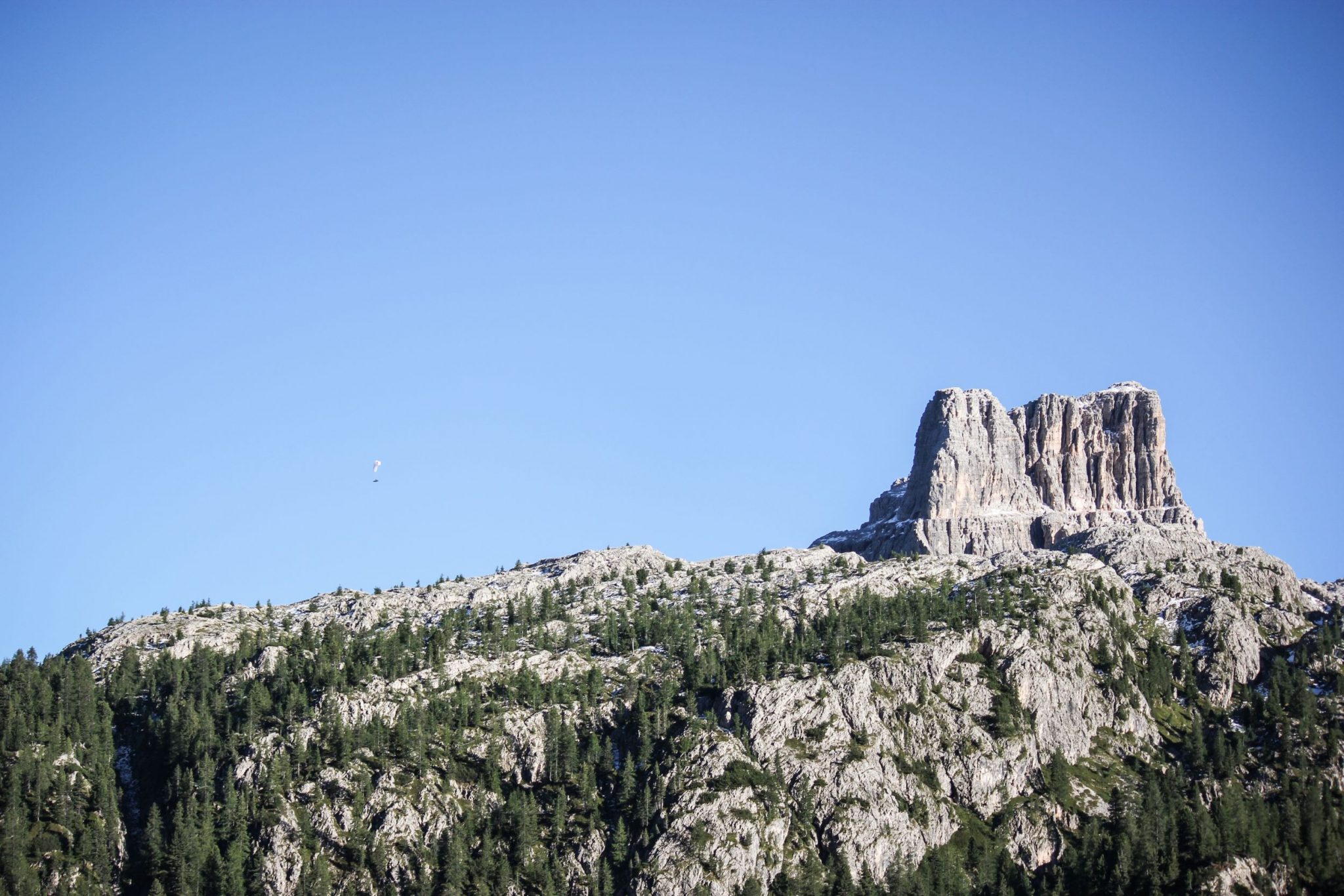 On the 4th day I was able to hike up Monte Serva and fly the fast stretch to Feltre with Tobias G., who by then had caught up to me. Here again the south wind spilled over the grappa massif, so we both landed on one of the northern foothills of the Cima Grappa to reach the last turning point at 6 pm on foot. As a result, we were able to make a very long glide through the Brenta Valley on the same day in the evening through the strong valley wind. This allowed us to break away from our pursuers who had been closing in. 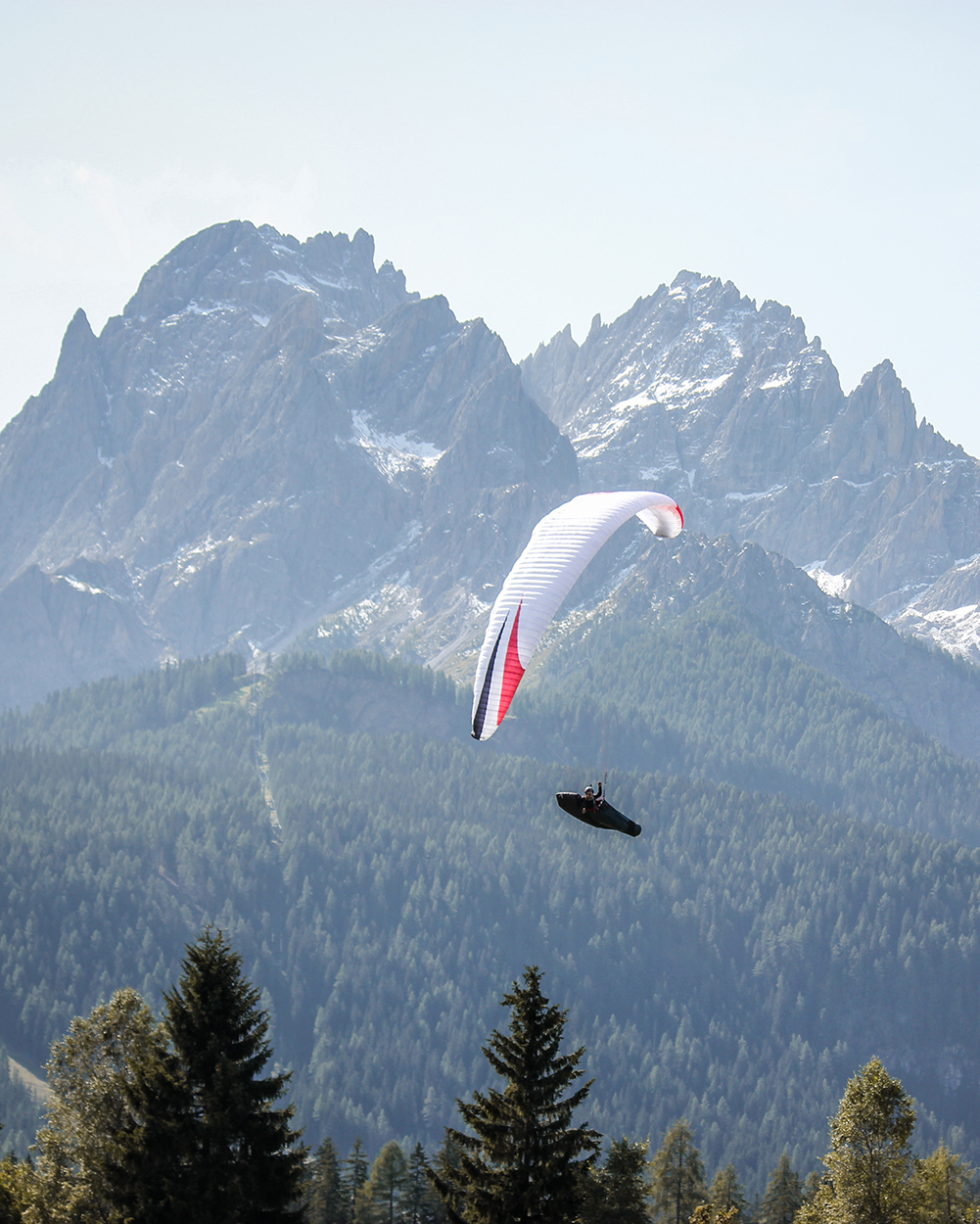 We completed the last 20 km to the finish quite fast with a small race for first place between Tobias and me. I reached goal after 1 hour and 40 minutes, about 10 minutes after Tobias. 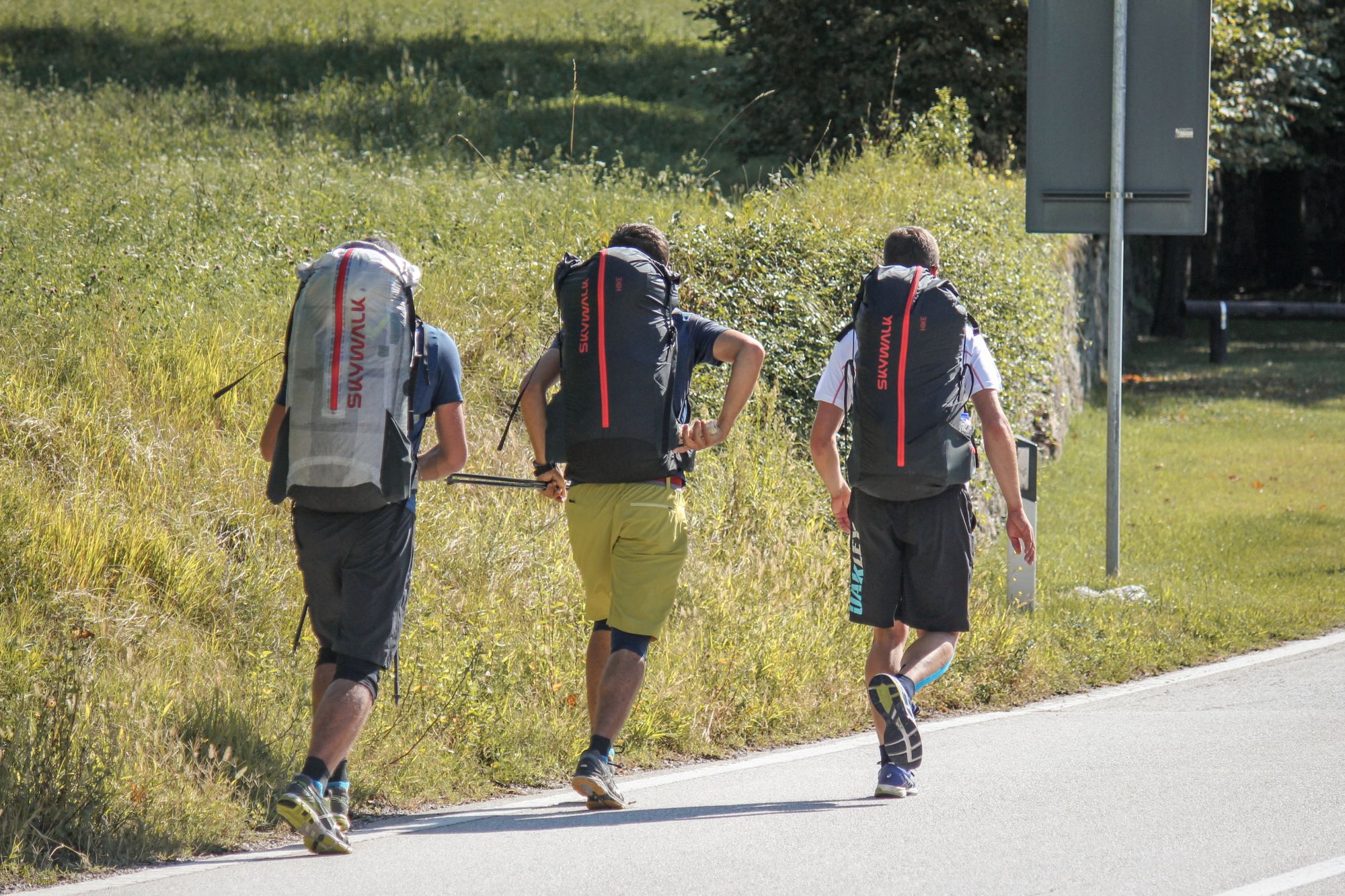 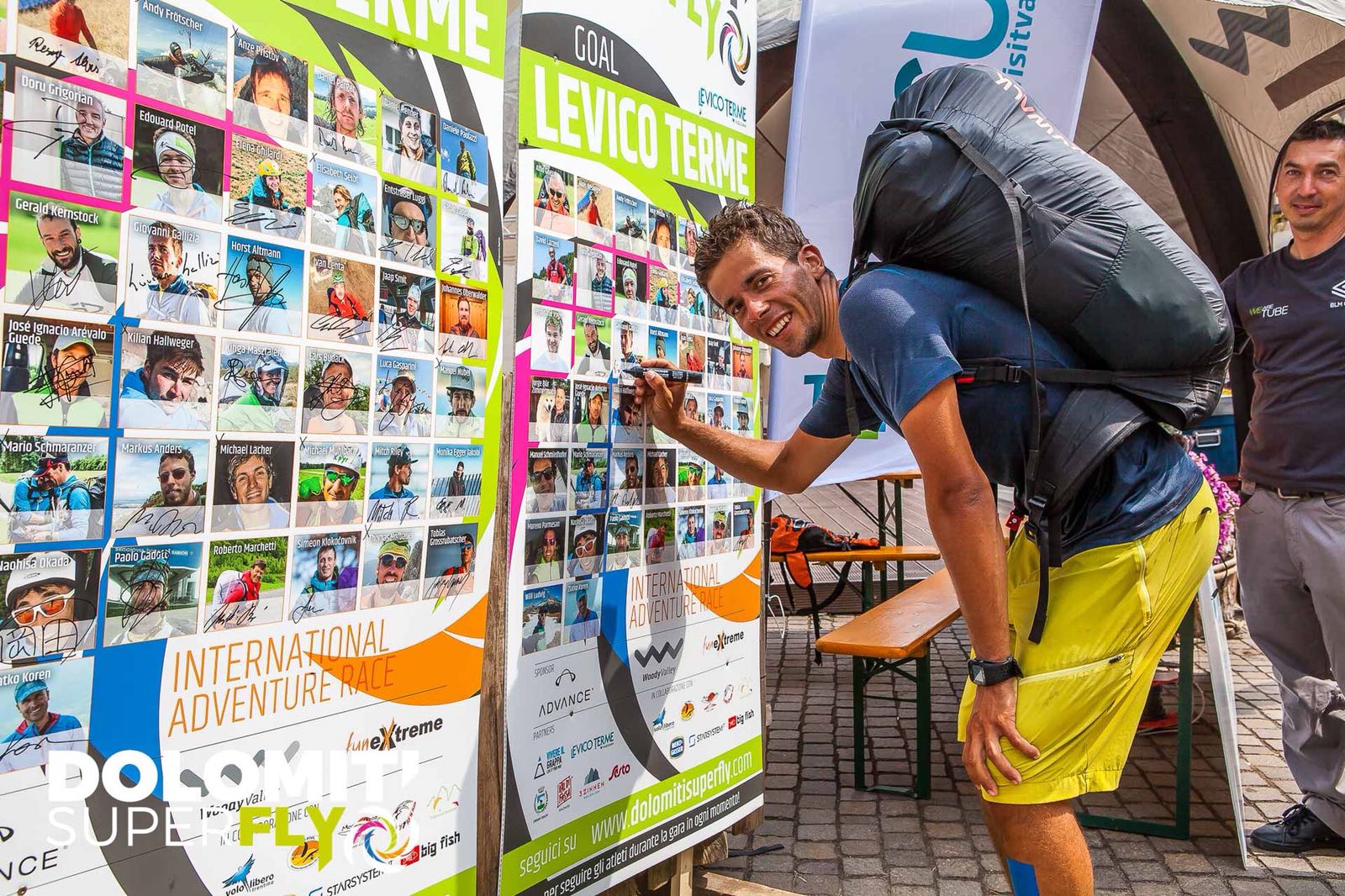 4 days of hiking and flying through the heart of the dolomites in a few of the best days of the years! The view was just amazing and even the long hikes were a joy! The best part was sharing most of it with many other pilots such as Markus. Many hard choices had to be done and a few mistakes were hardly paid. Still the great support from my team and from friends at home helped out in the toughest moments.

It feels much as a team success as everyone was neccessary!

The best equipment made a big difference, being light on the ground and fast in the air! 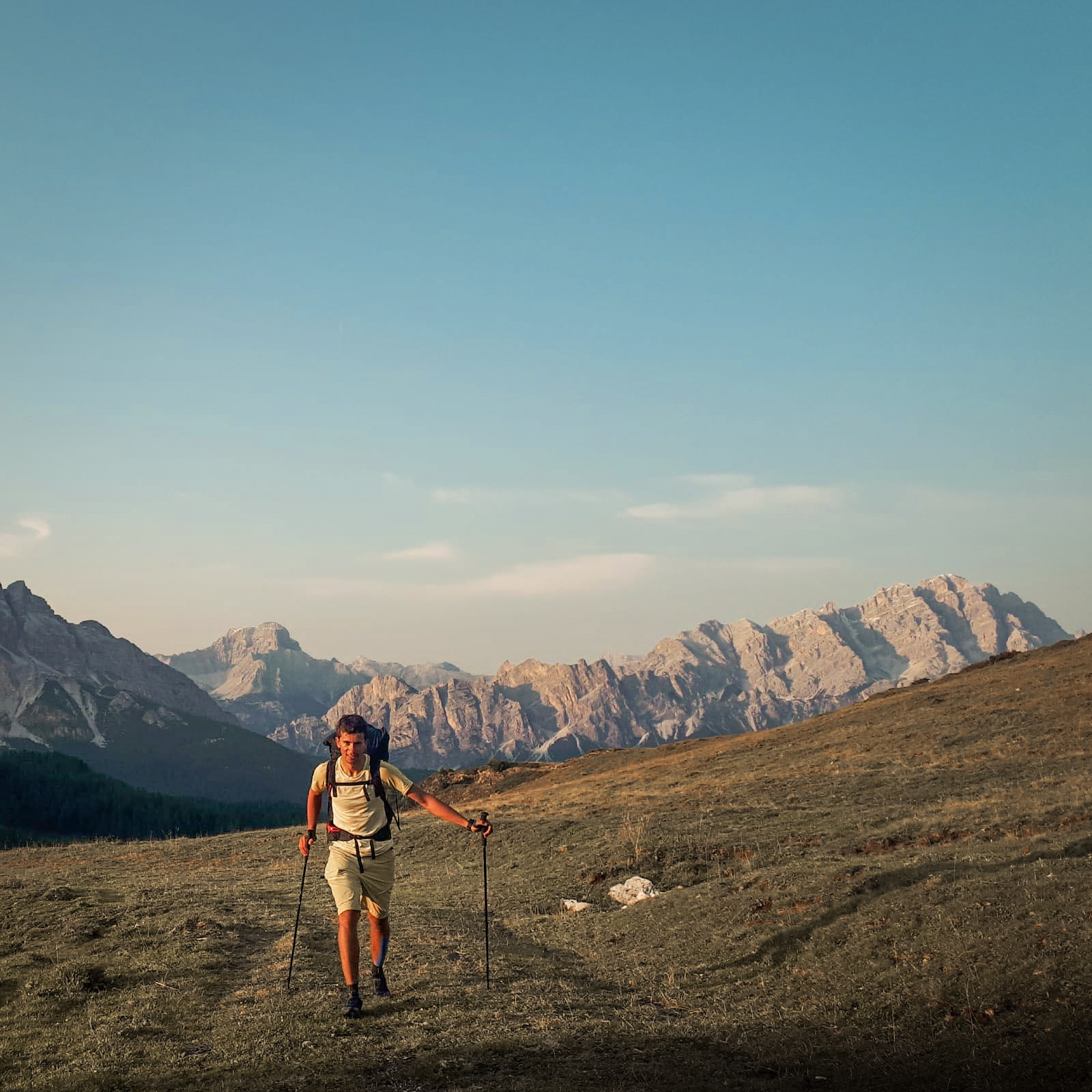 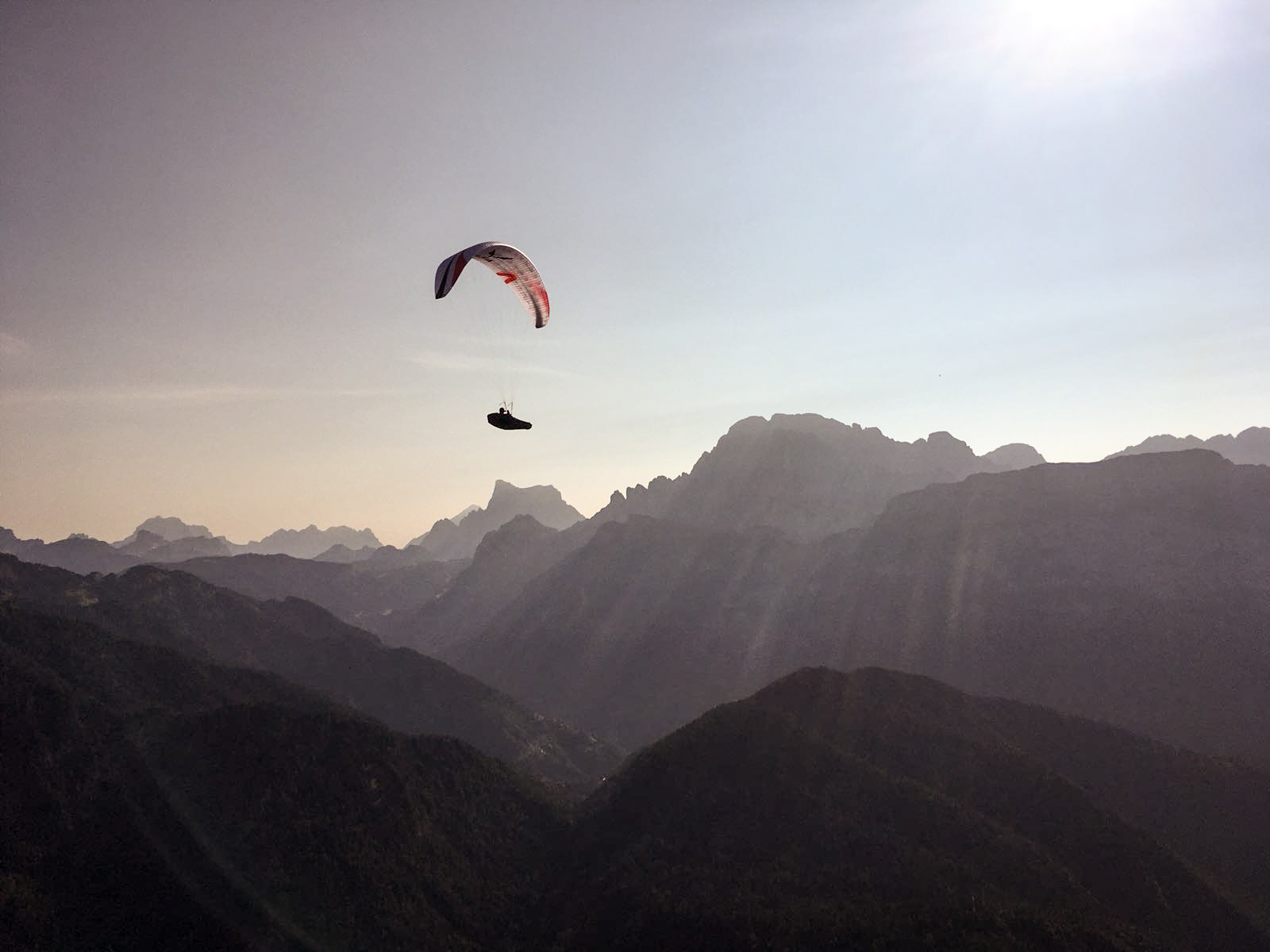 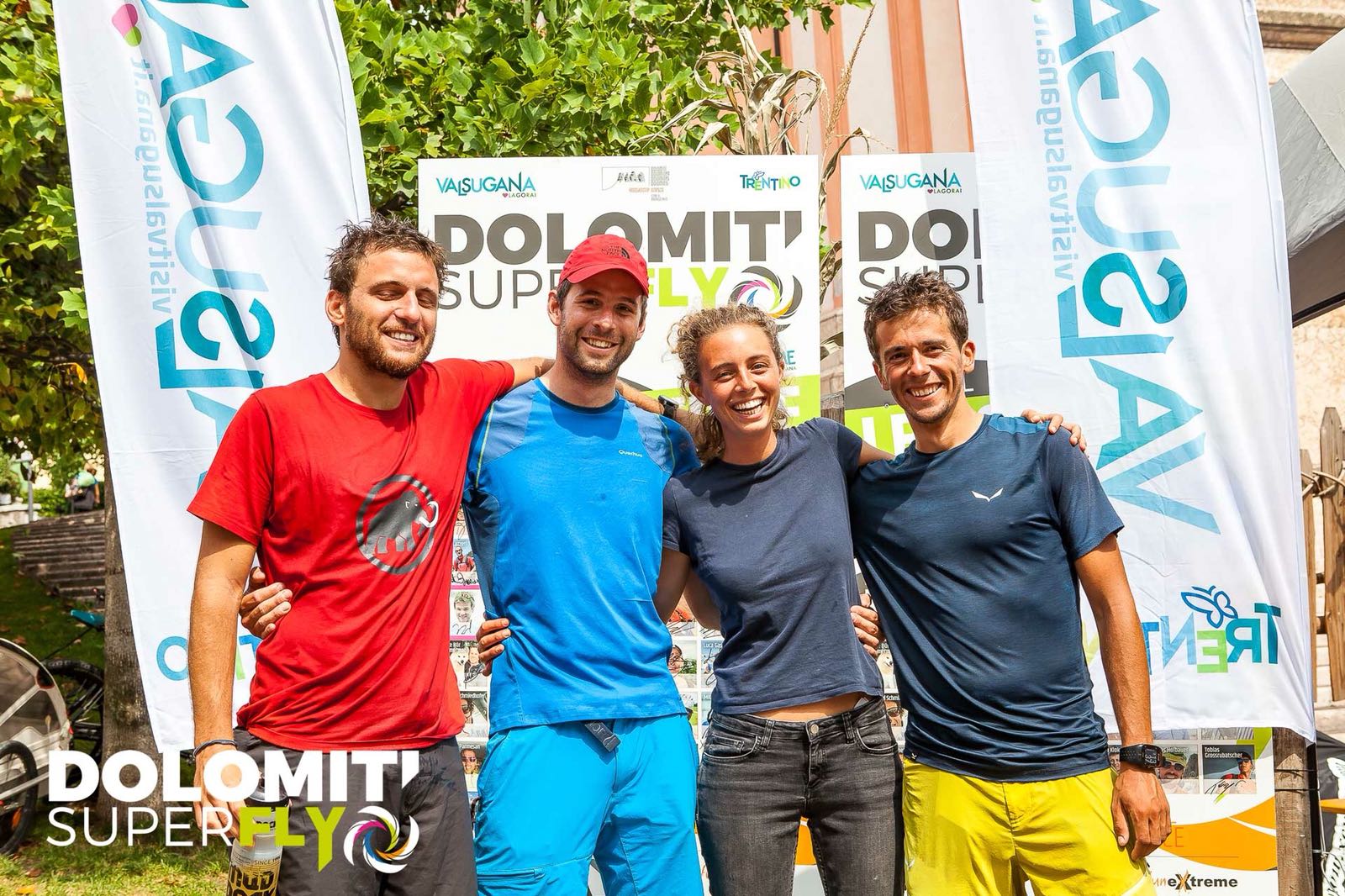