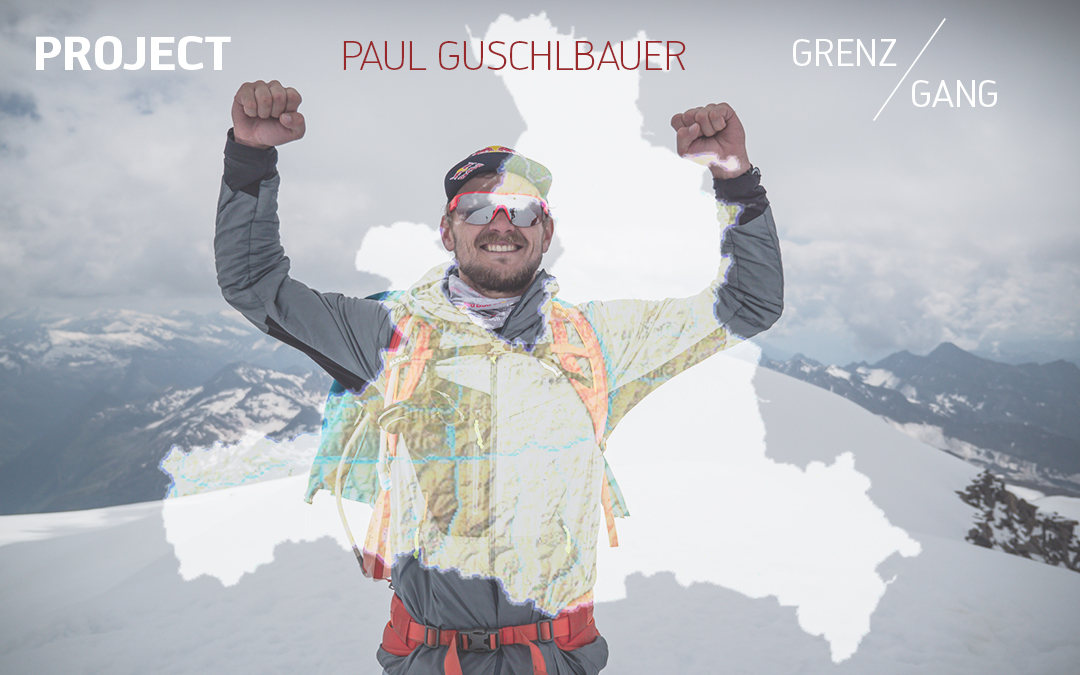 “BORDERS CAN ALSO BE WAYS”

Paul Guschlbauer’s perfect Red Bull X-Alps training track was defined exactly 100 years ago, with the defining of the border of Salzburg and its incorporation as a federal state into the Republic of Austria. “I couldn’t have thought of a more exciting route”, Paul confesses. “After the government lockdowns measures thwarted my plan to do a hike & fly training in summer across Austria, Switzerland, Italy and France – that is, from Salzburg to Monaco – by closing the borders, I had to come up with a new idea…”  According to Paul, in retrospect, that was the best thing that could happen! Because why dream of faraway places…? “I was looking for a training route that, if possible, would be exclusively in the mountains, away from busy roads and about as long as the distance from Salzburg to Monaco. After a little research it was clear: The border of Salzburg is the perfect route! It runs over the most beautiful and highest mountains in Austria, always along the ridges and stretches over a length of almost 800 km. I live in Hallein, from where the next border stone is only 1.5 km away. So it’s perfect to start the tour directly from my front door! You can also choose the ´intensity of the challenge´… for me the borderline was like an infinite number of turnpoints, and the more I could reach the better,” says Paul. 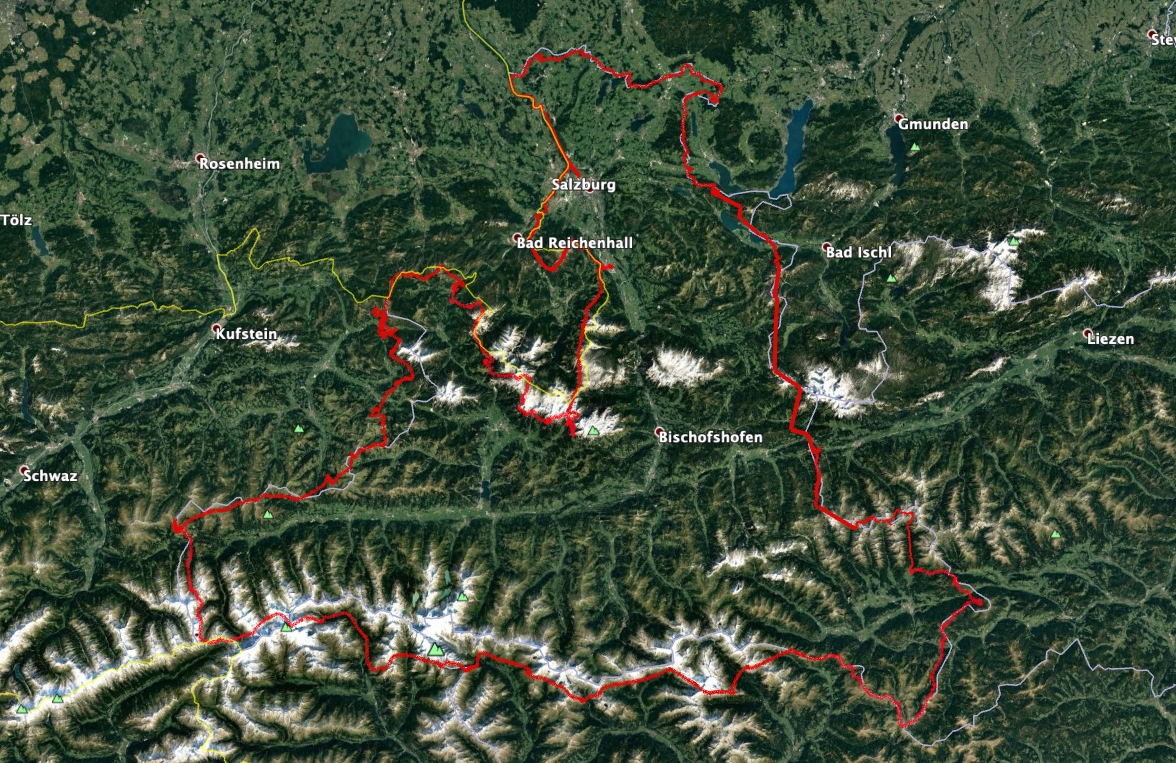 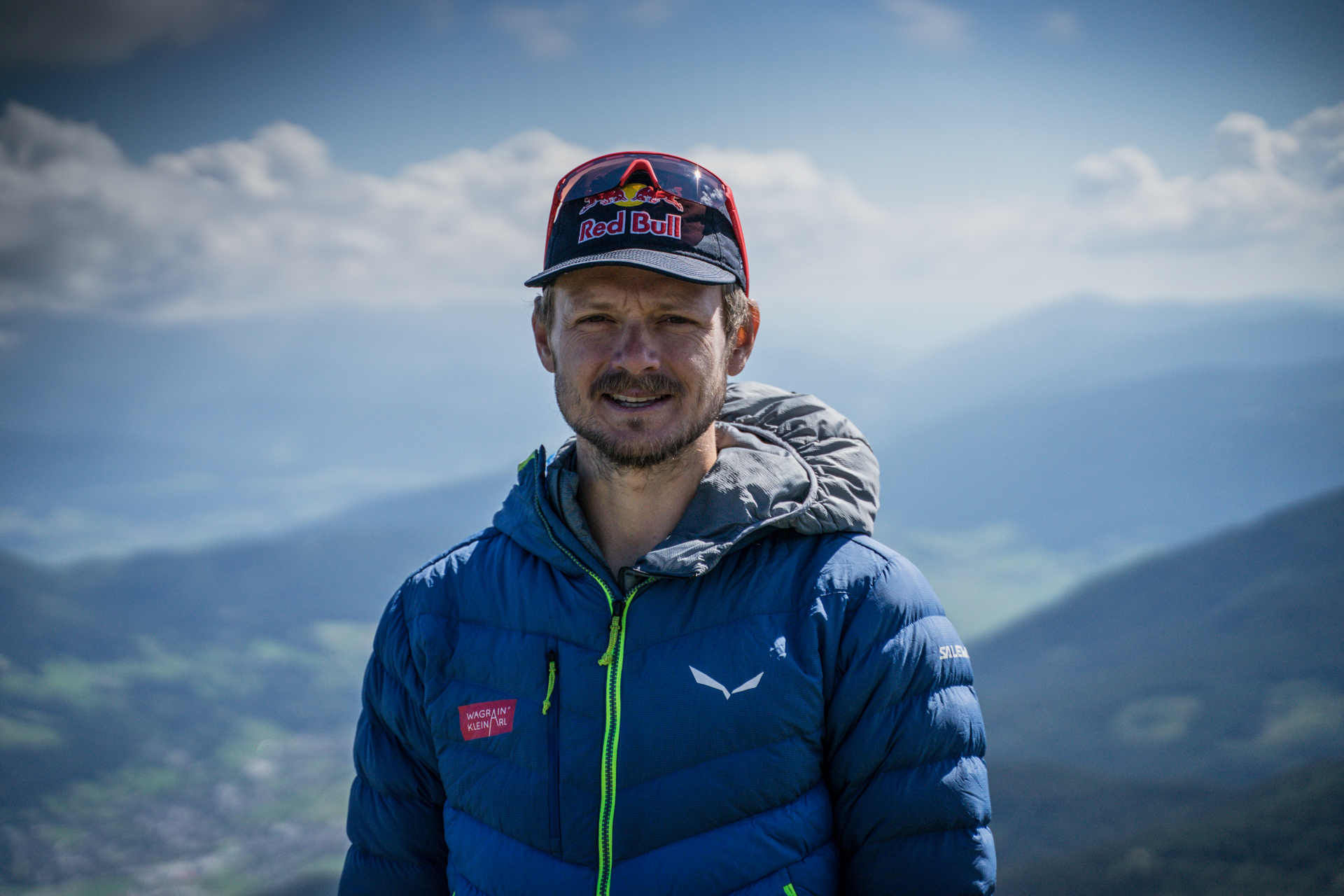 “ADVENTURE IS IN OUR POWER”

It began in the middle of July. It was 5 pm when Paul left his apartment. Equipped with a sleeping bag and some food, his first small challenge was to climb the south ridge of the Bamstoa with his 17-kilo backpack. “Normally this is no problem, but now it was immediately clear that this heavy backpack would be the biggest challenge…” he adds. At sunset Paul reaches the Untersberg, with its beautiful view down to the city of Salzburg, where he unpacks his sleeping bag and covers himself with his paraglider. If the wind is right in the morning, he plans to glide as far north as possible, where his wife will bring him his mountain bike so that he can cycle the 150 km borderline around the ‘flat’ part of Salzburg. The plan works out and after a strenuous day on the bike with more than 3000 vertical meters covered, Paul arrives at the foot of the Schober. From there he plans to continue the next day on foot and with the paraglider along the border towards the south, to the main ridge of the Alps.

The weather still plays along well on this day and Paul succeeds in flying over 100 km, far into the high mountains, up to the Reiteralm. “In the beginning I got a bit off track and had to land in the best flying conditions because I just couldn’t follow the border anymore. Then I had to think about a lot of things and I had to make some basic considerations and decisions for myself. It was clear that it will not be possible to follow the border all the time while flying. The thermals and the wind do not cooperate in this respect and are often found a few hundred meters away from the borderline. If I wanted to finish the project in a time similar to a Red Bull X-Alps competition time (around 10-14 days), then I would have to fly and make this compromise! In the end, apart from an adventure, I want to leave a track that clearly shows the state of Salzburg!” 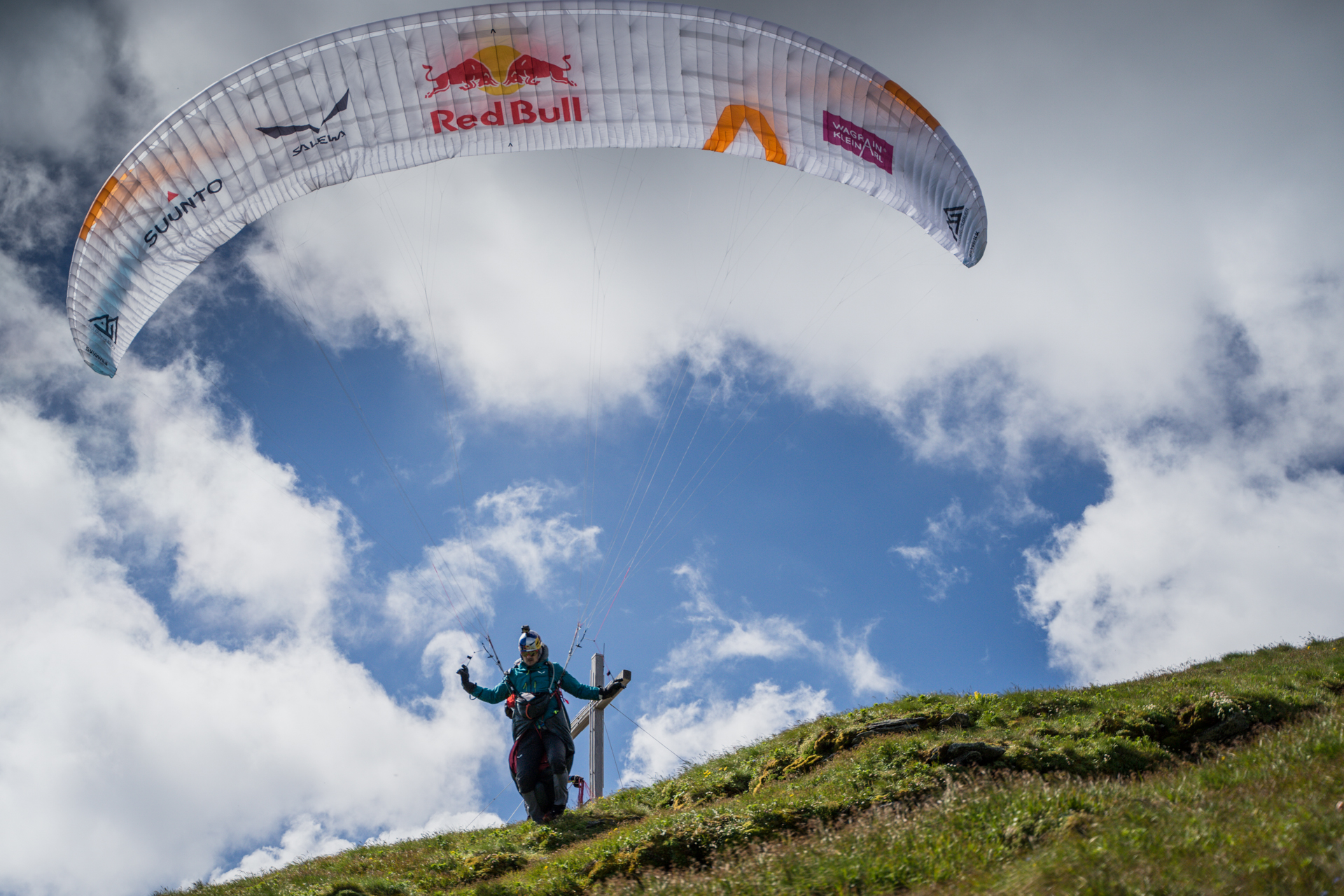 “IF YOU STOP, YOU WILL NOT MAKE IT ANY FURTHER”

Days four to eight were characterized by bad weather and strong winds. Flying was out of the question, unfortunately in one of the most remote areas of Salzburg where he planned his first crossing of the Alps and the Lungau. “To spend five days in the mountains, in the clouds, in the rain, and sometimes without a road and travelling alone, was an enormous physical and mental challenge. But with the clearly defined route and my own front door as my goal, my motivation was consistently high,” says Paul. “And the experience was incredibly beautiful! Almost no people and one deserted summit after the other!” In these days alone Paul covers 13,000 vertical meters and 150 kilometers on foot. 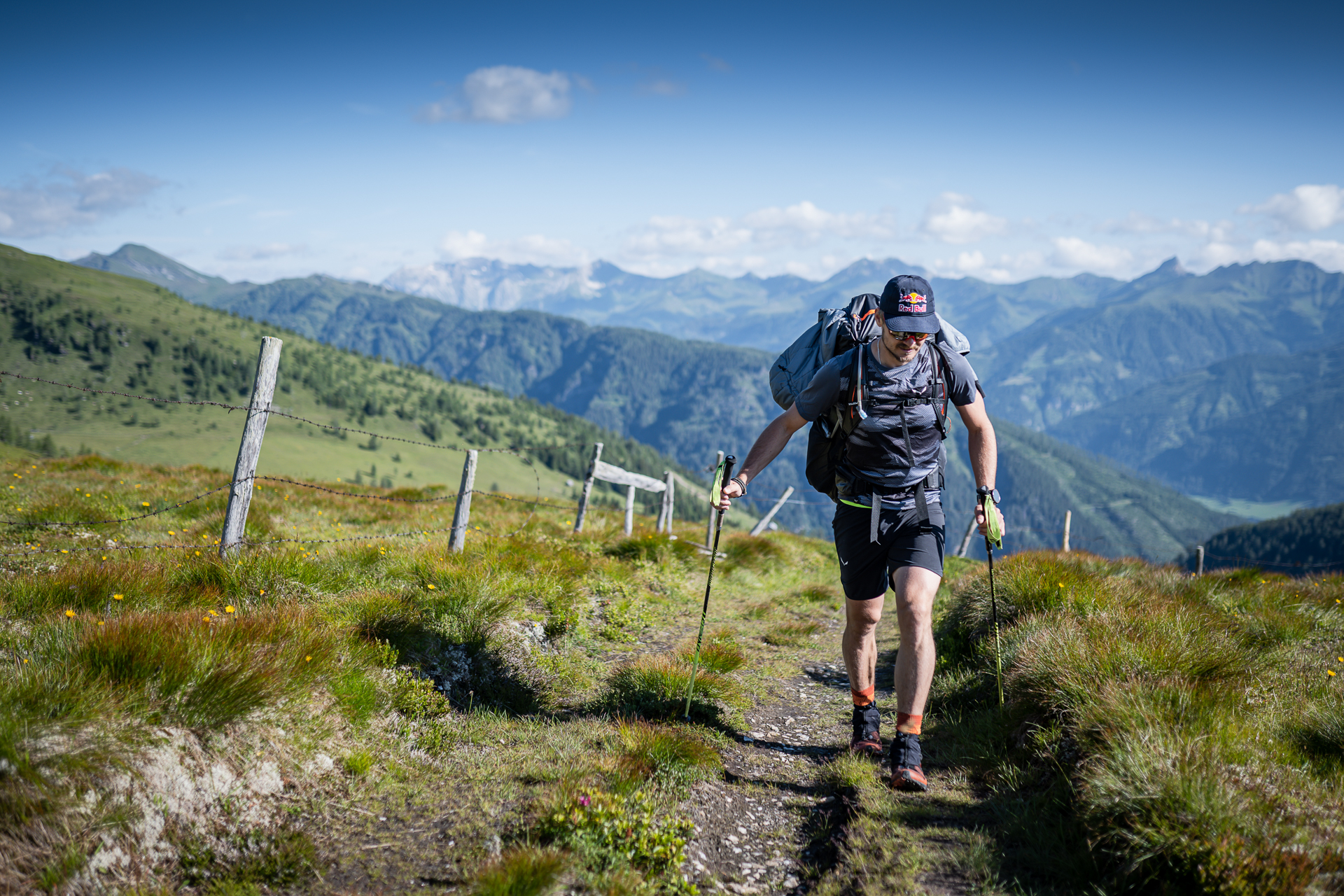 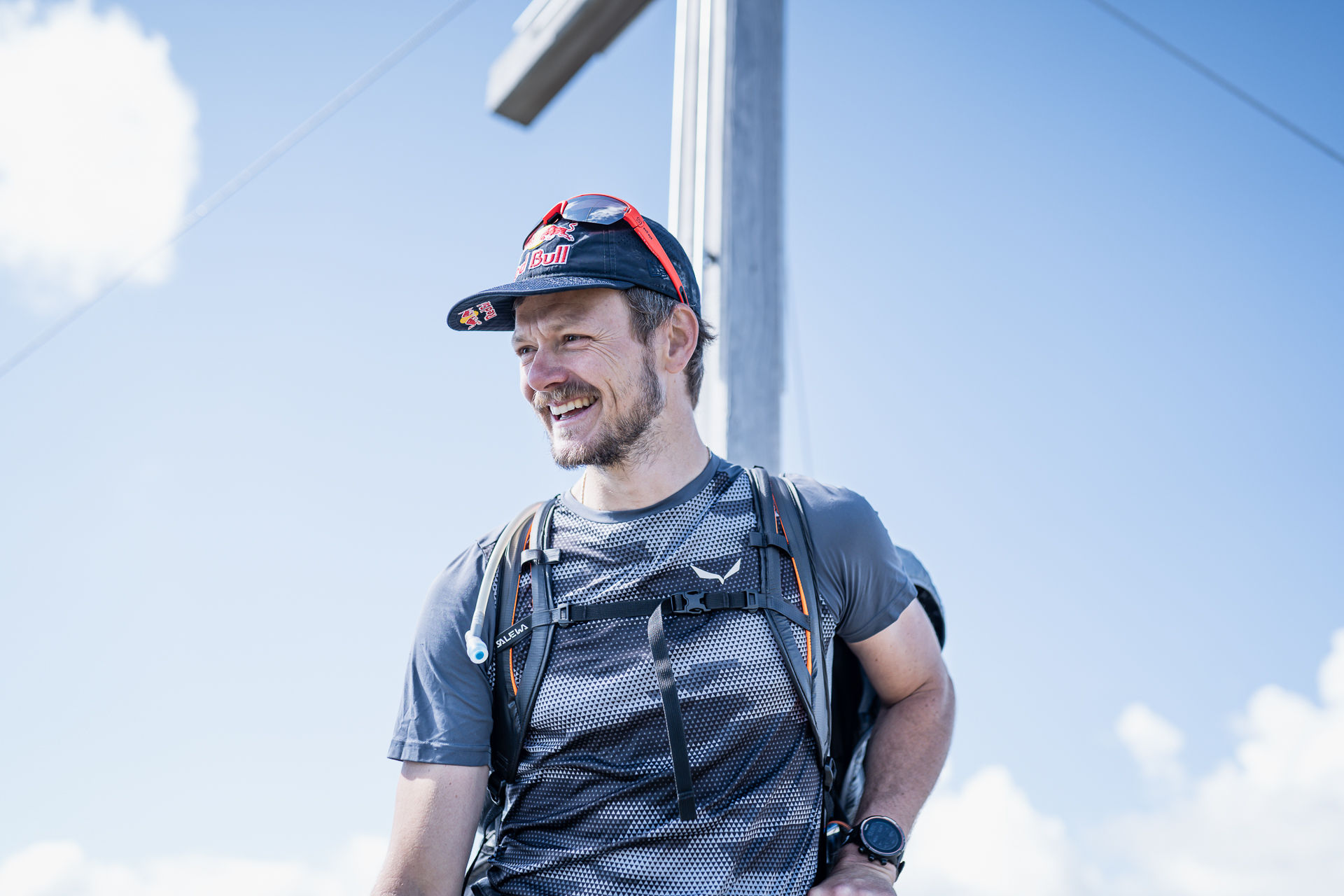 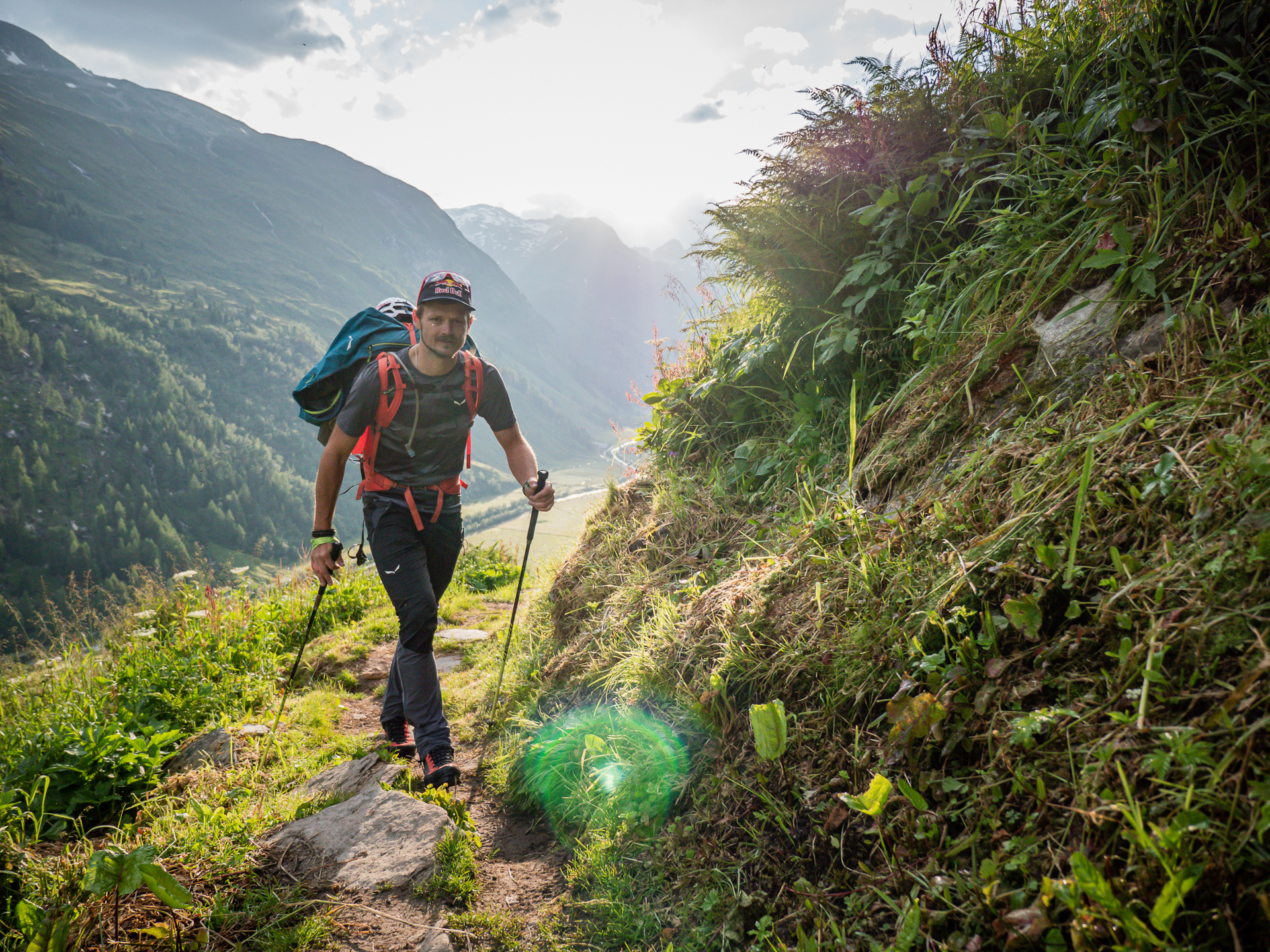 “There was a section of my route where it was clear that I had to fly! The Hohe Tauern National Park starts at the Katschberg and stretches westwards to the border of Italy – and there take-off and landing is no longer allowed. So I had to fly and from the beginning I wished for the right weather in this section – and my wish came true!”. On the ninth day Paul takes off for one of his most beautiful flights directly along the main ridge of the Alps, past spectacular peaks like Hochalmspitze, Sonnblick and Großglockner. The conditions are perfect and so Paul can cover the 100 km along the highest mountains of the Austrian Alps in only five hours. “It would have taken me five days on foot for this section…” adds Paul. But now it was time to continue on foot again, because the next destination was the 3657m high summit of the Großvenediger, the highest point of Salzburg. Some friends came to his aid, among them his long-time Red Bull X-Alps supporter Werner Strittl. “Werner is a very good friend of mine and also a mountain guide. There were some glaciated sections and high mountains to conquer and I was very happy to have his help! We spent two very cool days together in the mountains before I went on alone again…” Paul explains. Unfortunately, the two of them couldn’t climb the Dreiherrenspitze, the westernmost, highest peak flanking the border triangle of East Tyrol, Salzburg and Italy, as planned, because Werner got pain in his foot. But we’ll make up for it, we agreed,” Paul adds. 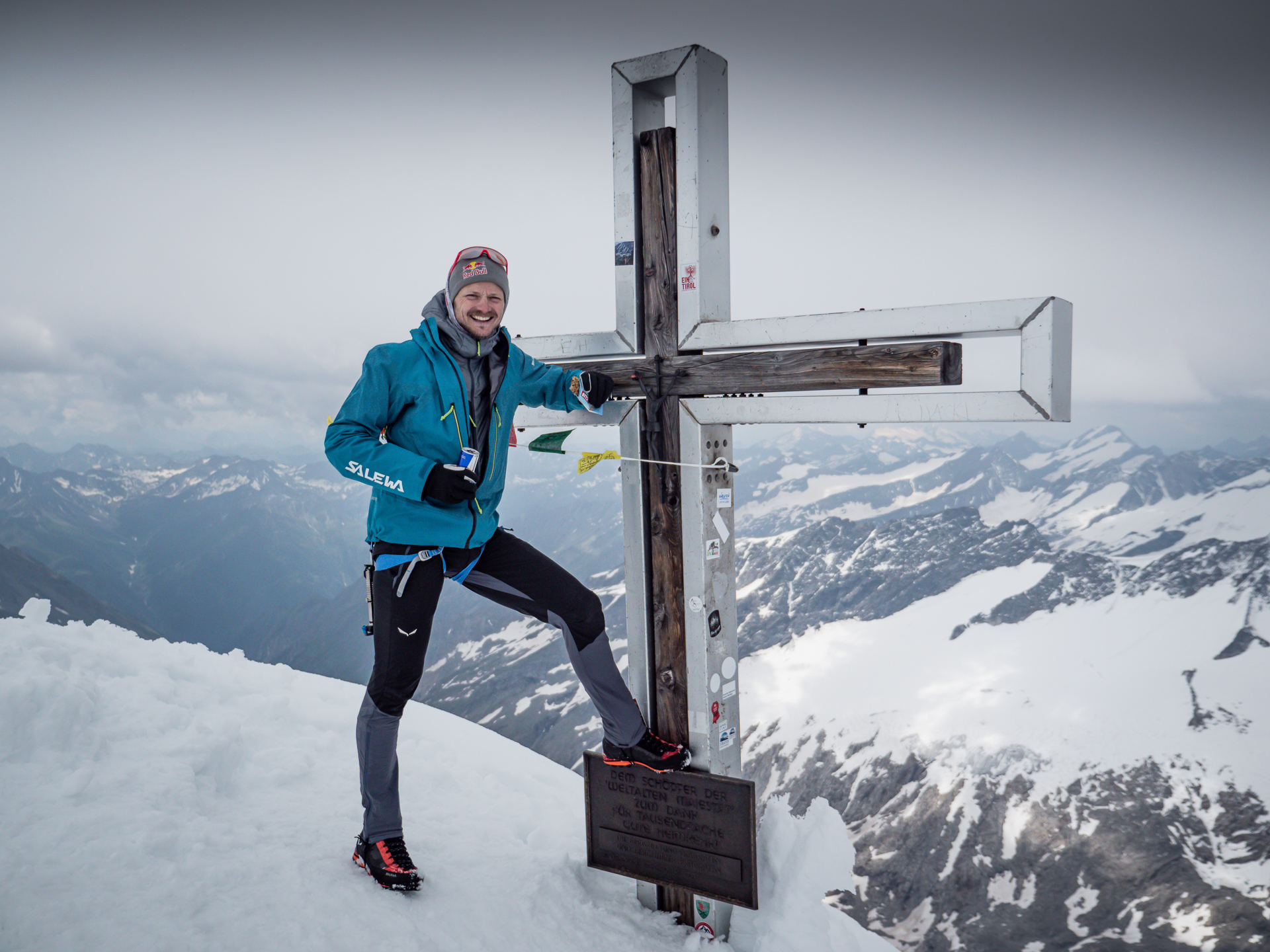 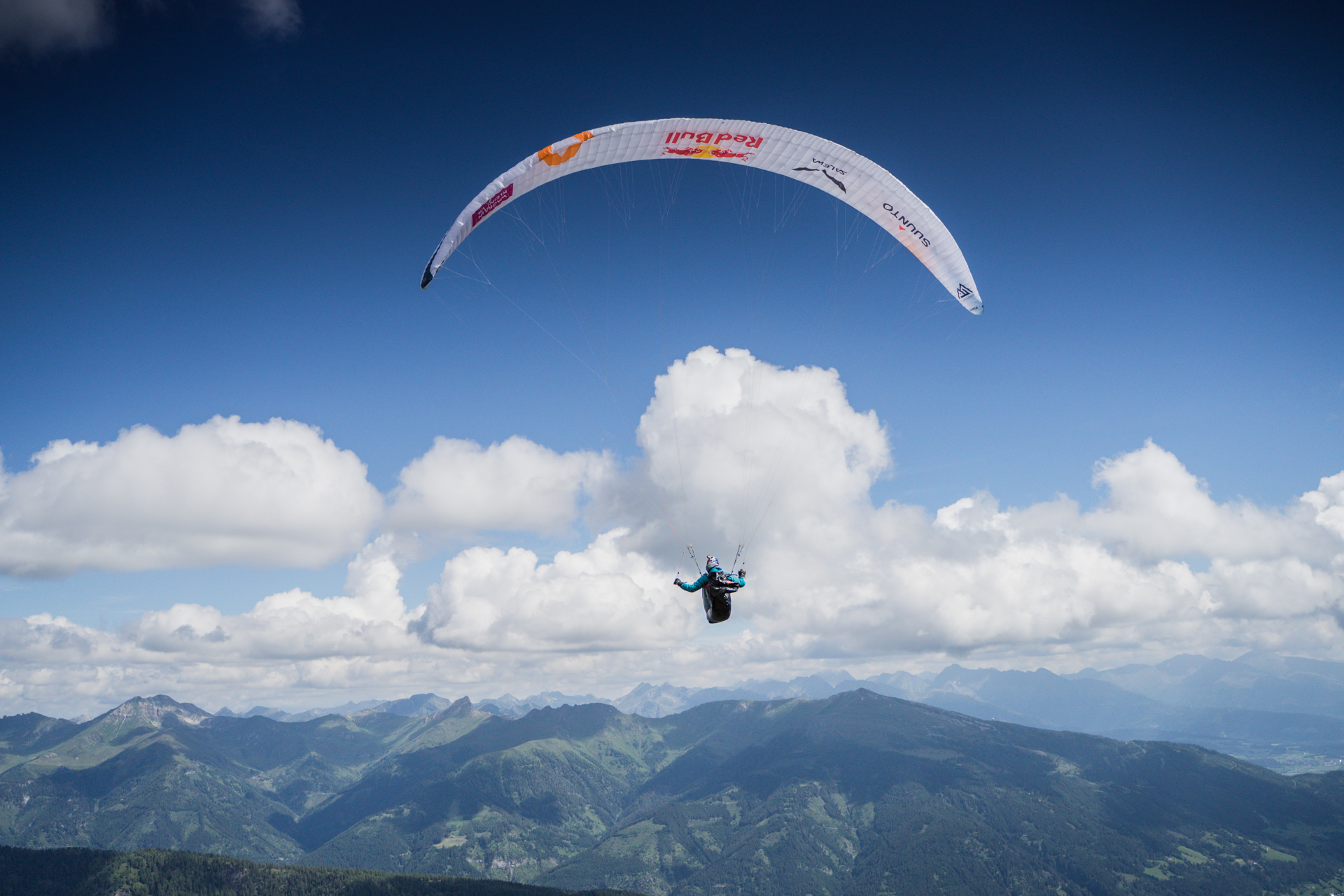 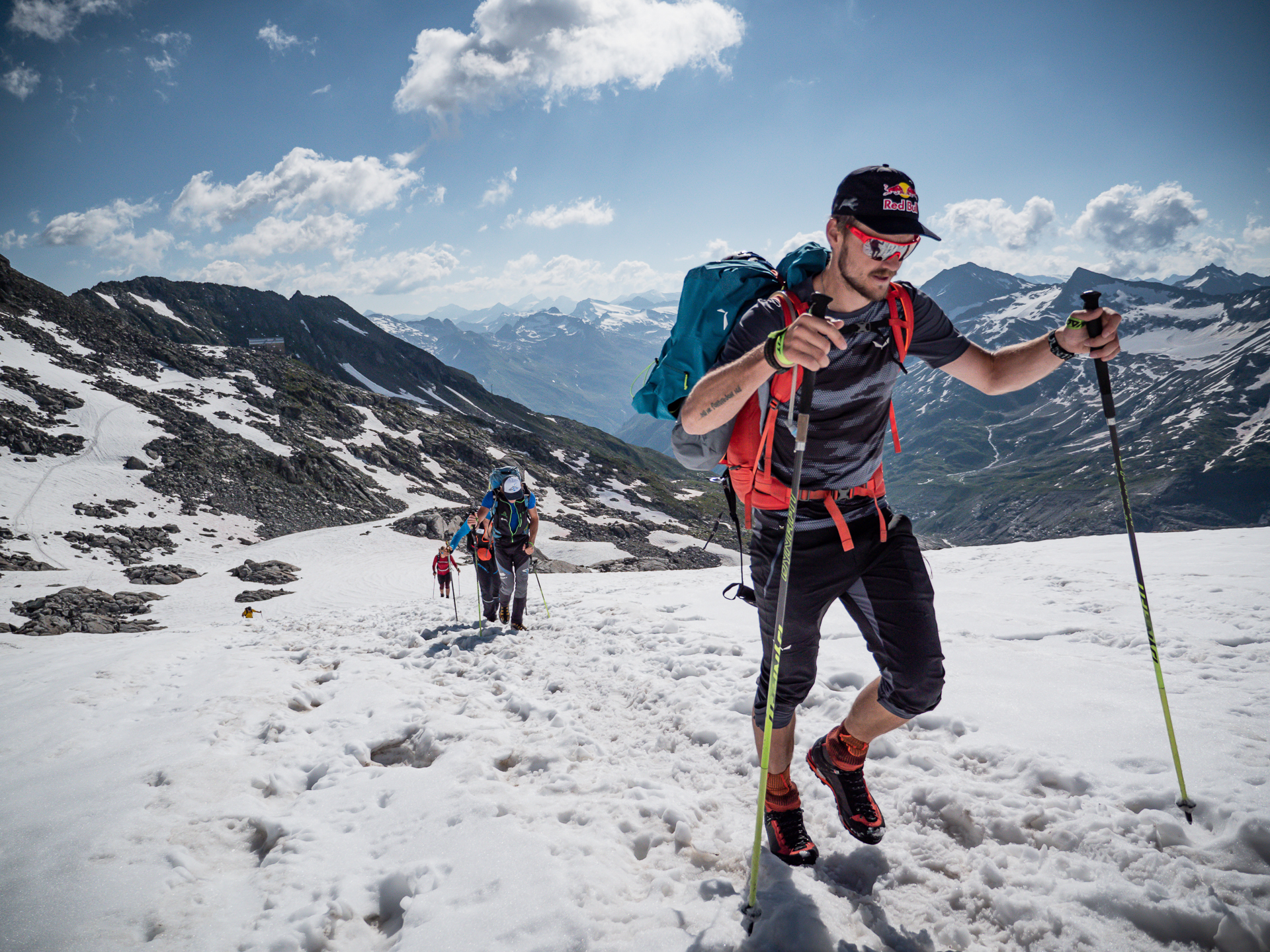 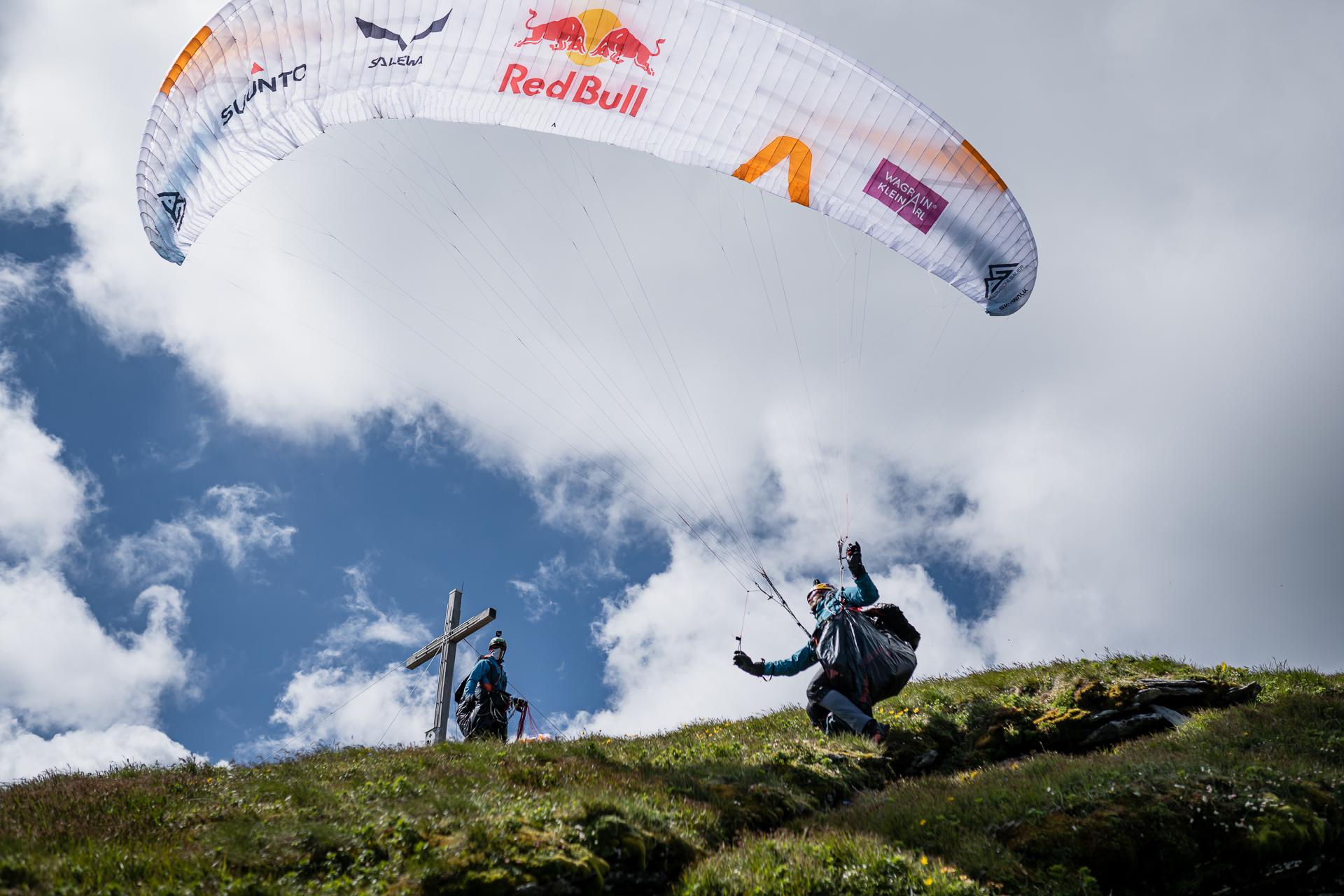 “TAKING IT AS IT COMES”

“Nothing was free: I had to work hard for everything”, says Paul as he looks back on the last days of his adventure. “On the 12th day I thought for a moment that I could almost make it home by flying, but the wind was much stronger than predicted and the conditions in the air were challenging! From where I landed at the end of the day, my home was only 30km away as the crow flies, but at this point the border makes another turn over 55km of extremely remote and difficult high plateaus. On a good flying day you can do this in a few hours, but on foot you walk through a labyrinth of rocks for several days…and the weather forecast was anything but good. After 13 days on the road, this moment of realizing what lies ahead was the low point for my moral,” Paul explains. 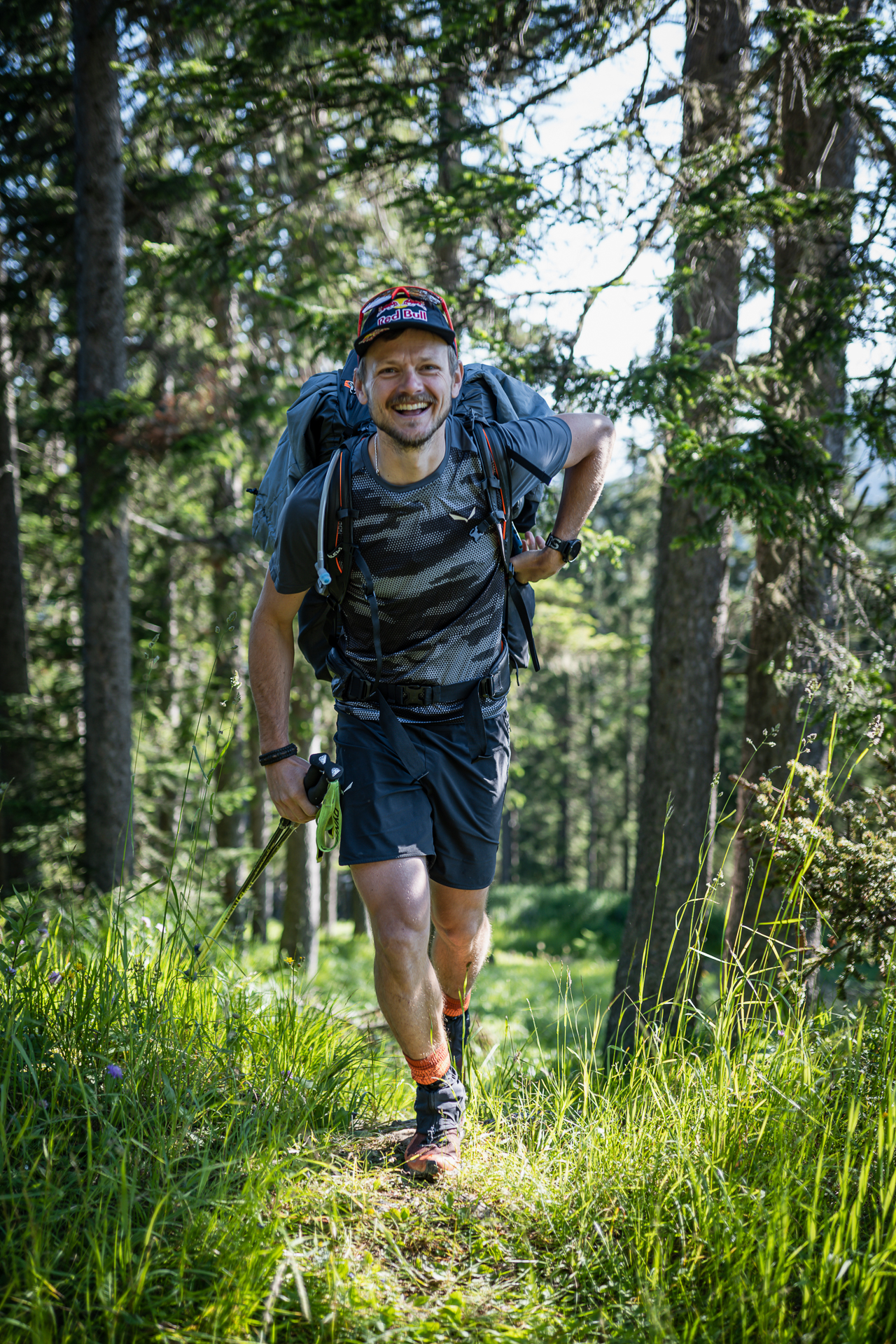 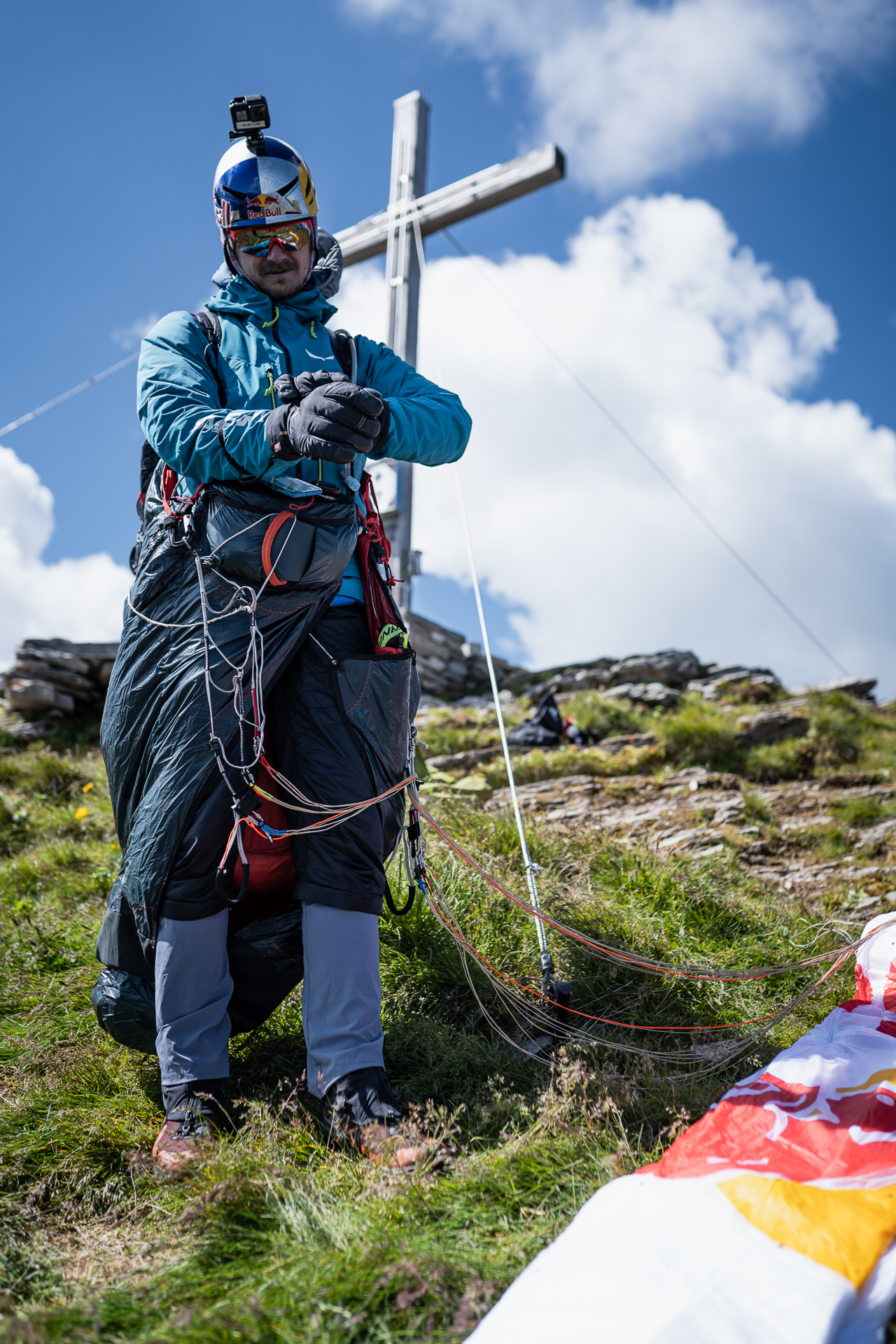 So he put one foot in front of the other and poured on the ambition! “It was simply time to put a successful end to it all”, he adds. “After an unbelievable 17-hour day and a short night high up at the Steinernes Meer above Saalfelden, there was ‘only’ the crossing of the Hagengebirge and the crossing of the Hoher Göll ahead of me. My food was used up and my only chance was to ask a friend to join the seven-hour march to meet me on the way and help me out. It was all arranged. I got up with the first rays of sunshine and the plan was to glide north from a saddle towards him before the rain came! But at this point, unfortunately, it was impossible to think of launching. The wind was too strong and it blew from the wrong direction. So I had no choice but to climb further up, along the rocky and impassable ridge.

At the top, the bad weather front was already very close and the wind was borderline strong – but it came from the right direction. It was eight in the morning and I was in the middle of nowhere and had to make a decision. I observed the situation for about 15 minutes and then decided to launch. In the rocks there is a slight danger of getting stuck with a line and tearing it. Besides, the strong wind can lift you up and catapult you into the rocks…” explains Paul.

But everything went well and Paul had one of the most spectacular flights of his life. “It went relatively gently and constantly upwards and I was able to fly high 30 kilometers in one hour high above the Königssee over the endless stone desert, Berchtesgaden and the Göll to Hallein! It was an incredible experience and a huge relief! My wife Magdalena was already waiting for us with our son at the landing site and we both could hardly believe it… We walked home together and the adventure was over. Just like that. It can go so fast when you’re flying a paraglider…’ Paul reports relieved.

His friend, who tried to meet him with the food, didn’t hold it against him. 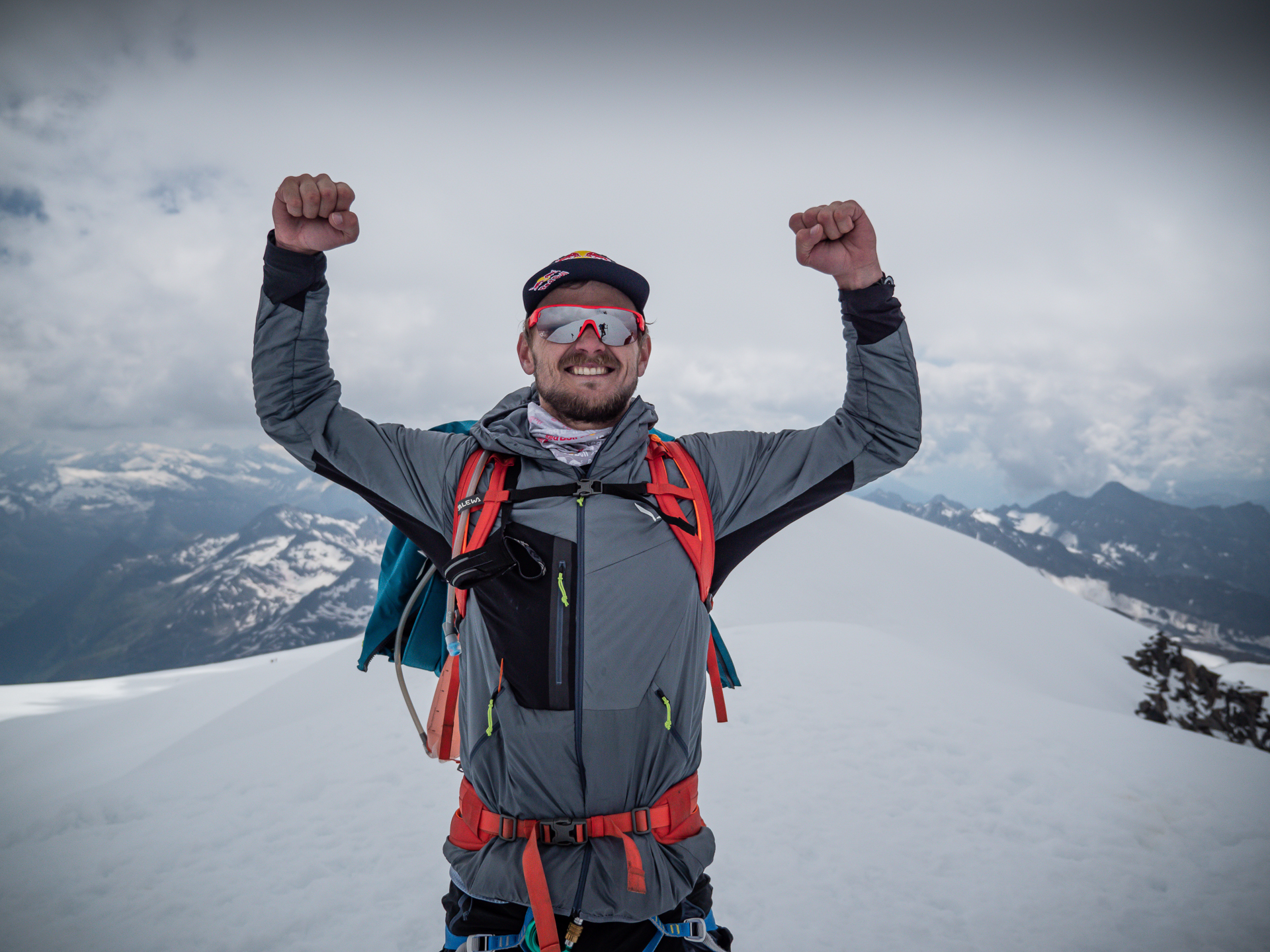