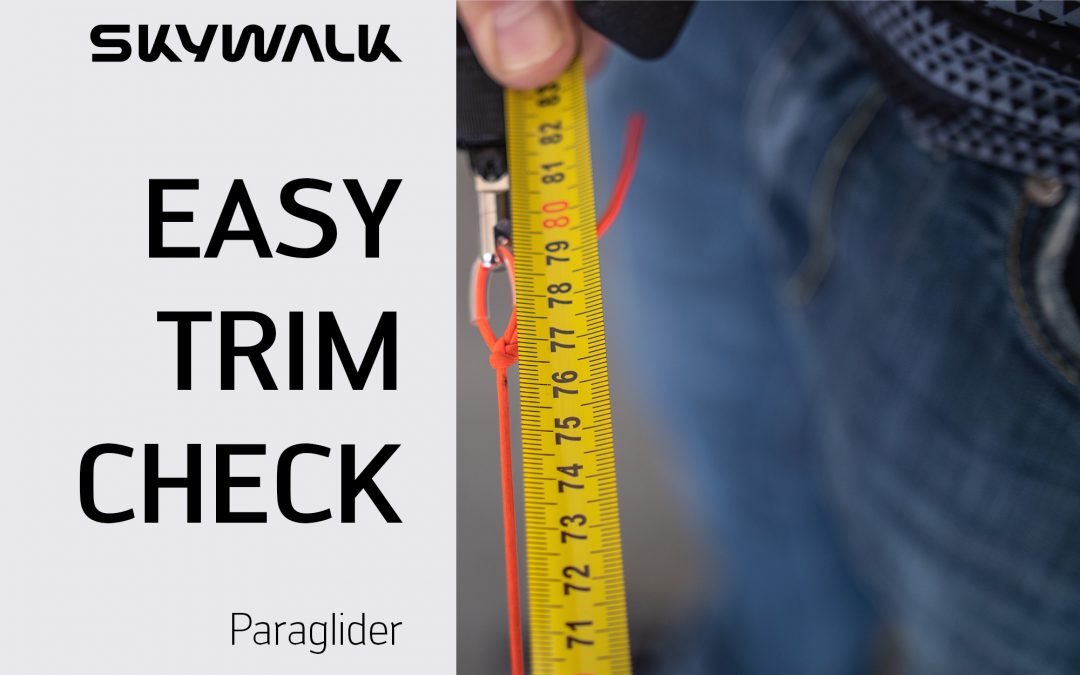 General safety problems due to shrinkage of the brake lines – and a solution!

In recent years, there have been several paragliding accidents caused by a shortening of the Dyneema brake lines due to shrinkage. The consequence of this shrinkage is always a shortening of the control path. The stall behavior of the glider can be massively, adversely affected. Technical investigations of equipment by the DHV show that the shortening of the brake lines by shrinkage is a widespread problem. Shortenings up to 11 cm have been found. In some cases, the complete free travel of the brake lines shrank, so that the paraglider, despite fully released brake lines, was “pre-braked”. It is critical to note that this situation is usually not noticeable to pilots because they have not actively changed something on the brake lines, and these have never been adjusted. In addition, the shrinkage process – and thus also the change in flight behavior, takes place in a creeping fashion over a longer period of time. A pre-braked glider, as demonstrated by test flights, may also develop unusually aggressive and dangerous forward surge tendencies, e.g. after a collapse. The DHV has talked to several manufacturers about the problem. Together with the company Skywalk, the idea was born of ​​a simple, quick check of the brake line lengths that can be made by pilots. The people of Skywalk have put the idea into a simple concept for their paraglider range. This report presents the concept to those who are interested.

Brake lines are generally very lightly loaded; a paraglider has maximum braking forces of around 10daN (10kg). This force acts on the main brake line; the overlying line levels are burdened many times less. For example, of the 10kg on the brake handle of a MESCAL5, only about 300g reach the top of the brake gallery. Unfortunately, light duty lines tend to shrink to some extent. This means that the entire brake line system shortens in the course of flight operations. Because of the low load, this shortening is no longer “stretched out”, but rather persists permanently.

Lines are shortened because they are folded and bent when packed together, which lightly alters their structure. This structural change is different depending on the type of line, but in principle it happens to all paraglider lines. The lines become slightly thicker at a kink, drawing this volume from the length.

The shortening of the brake lines is, of course, heavily dependent on how often a paraglider has flown or how long it been packed, in which terrain it was launched, ground-handled, whether the lines have become wet, etc. Most manufacturers incorporate some reserve length in the brake lines of their gliders, which counteracts a possible shortening because it tends to be better to fly with too long brake lines than with too short.

This is due in particular to the fact that many wings are flown in countries where a regular inspection (2-year check) is unknown. After two years, the brake line length should normally be measured in a reliable inspection operation and corrected if necessary. If this is not done, then there is a risk that the brake lines will shrink so much that the brakes are actuated in normal flight with hands up. The consequence of such a change poses a great risk to flight behavior as the glider ages (e.g., delayed recovery from a parachutal stall, increased spin tendency).

The problem is exacerbated when a pilot shortens his brake lines himself, because he is more comfortable with the shorter line travel. For this reason, it is important that the complete brake line lengths be checked at regular intervals.

With a frequently flown glider (or one with a lot of ground handling) this check should take place at least once per season, ideally before the start of the season, of course. As few pilots have access to a measuring system, skywalk has developed a so-called Easy Trim Check for the brakes in cooperation with the DHV. The idea behind it is very simple. Since the A-lines are usually relatively heavily loaded and as such constant in length, they are ideally suited as a basis for a relative measurement to the brakes. The pilot compares at a defined, easy to find place, an A-line with a brake line over the entire length, from the canopy to the riser. On the A-line, the line shackle is used as the measuring point. For the brake, use the brake line knot.

The stretched lengths of these two lines are simply compared. From the manufacturer there is a nominal length for the difference at this position. If the brake line is shorter than the nominal length, the pilot knows that he must lengthen the brake. In our example, the regular difference between the selected innermost A-line and the innermost brake is 81cm. If the brake is 81 cm longer than the A-line, it is perfect. But it if is, for example, only 70 cm longer than the A-line, then the brake line has definitely shrunk and must be readjusted.

Because the difference between the whole A-line and the whole brake is usually less than one meter, the pilot only needs one meterstick for the measurement. If a brake is reasonably homogeneous, i.e. the same material is installed over the span and the forks are not extremely different in length, it is sufficient to check the difference in the brake line only at this one point to reach a conclusion about the shortening. 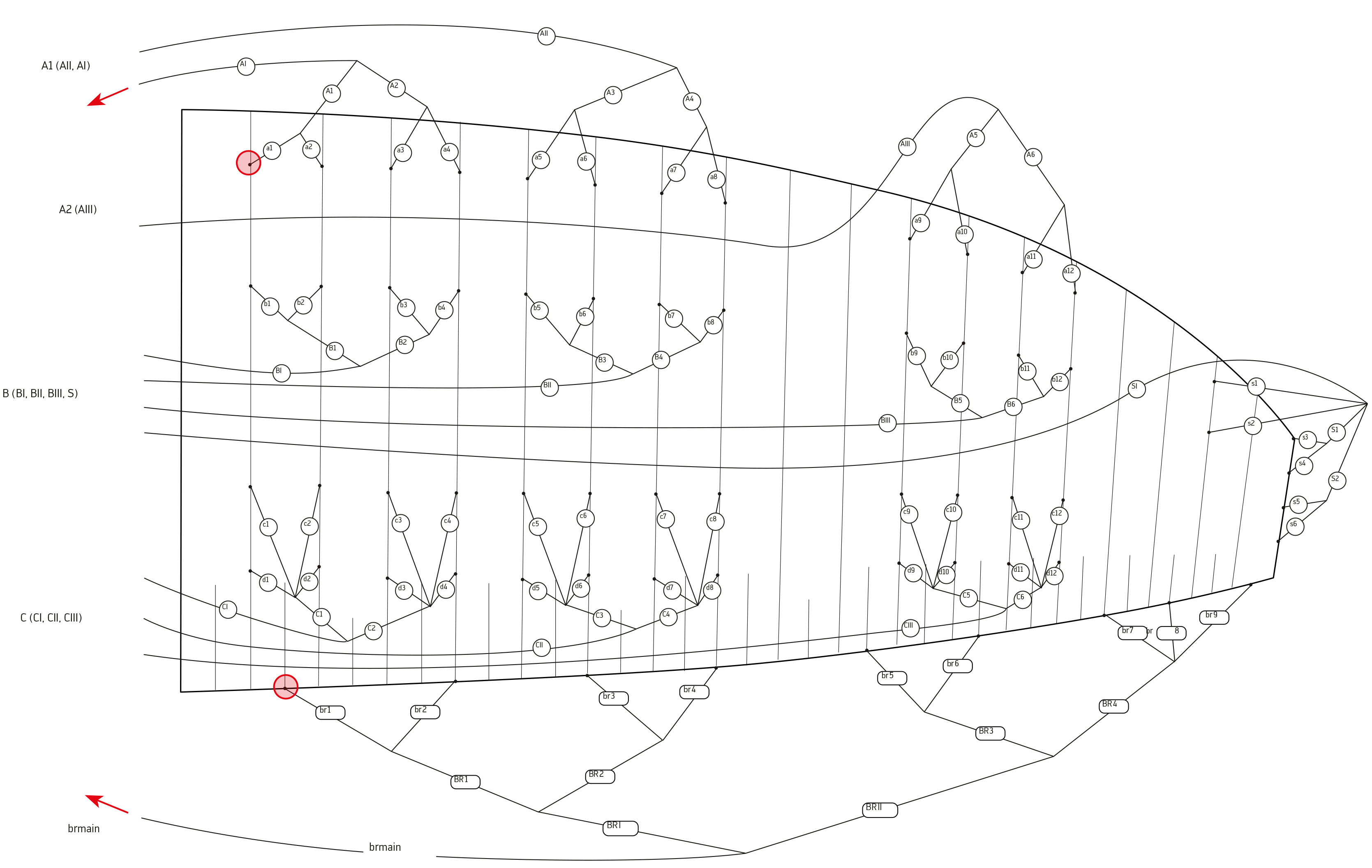 A helper now holds the A-line together with the brake line firmly at the same height (measured until the end of the line. Loops and gathering system are not taken into account). 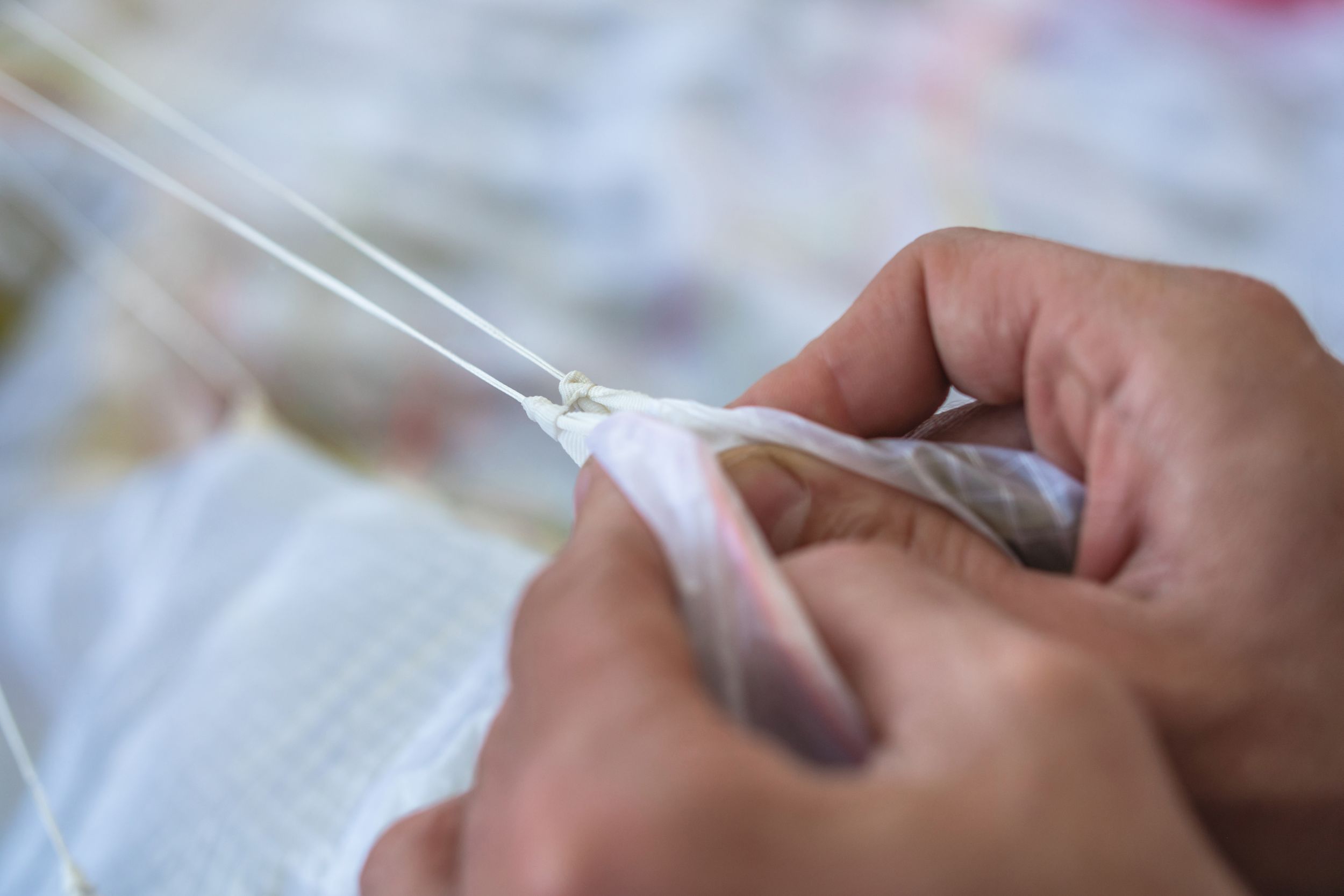 Alternatively, if no helper is available, you can tie the loops together with a spare piece of line and attach the line to a fixed point (wall, floor, tree, etc.). 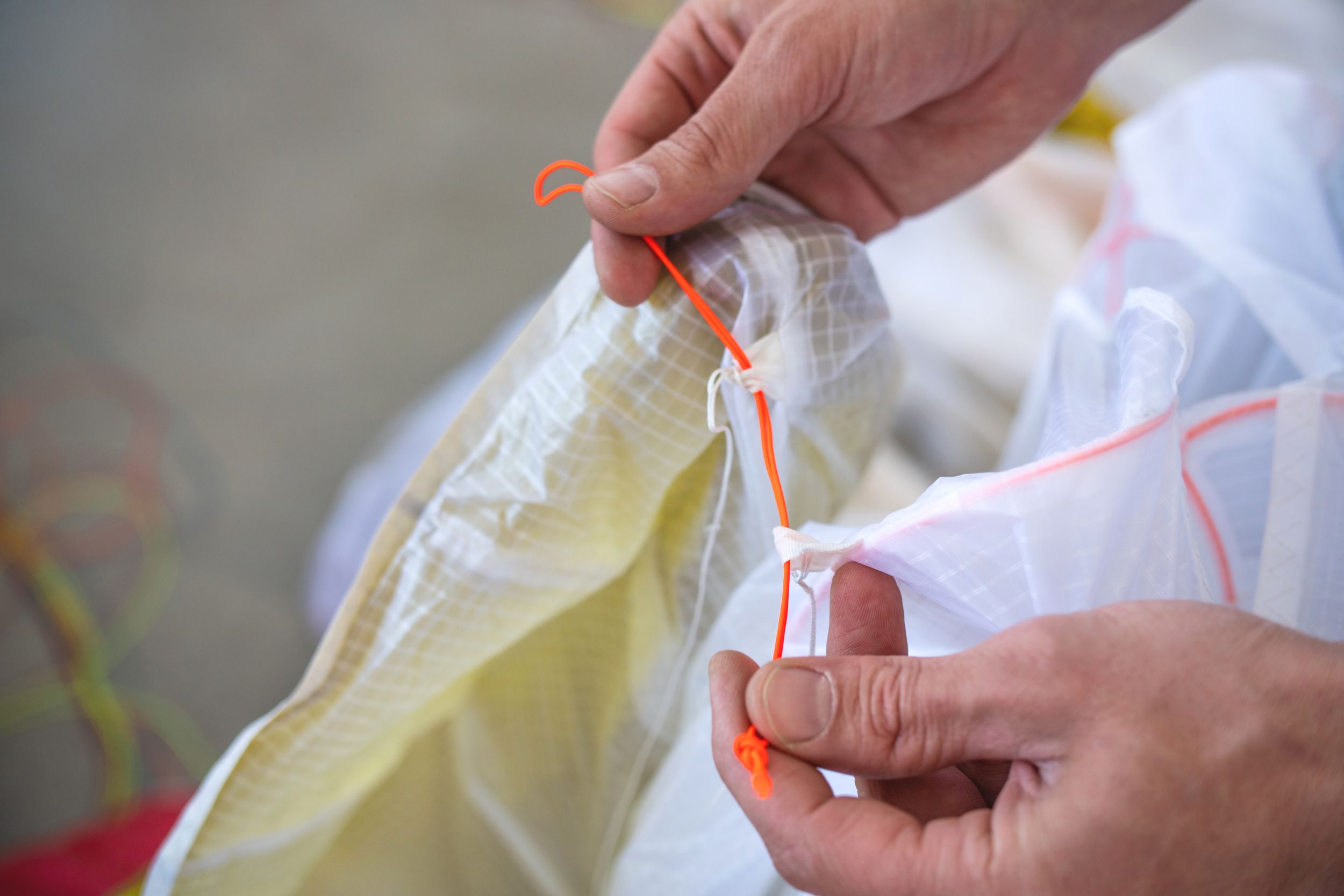 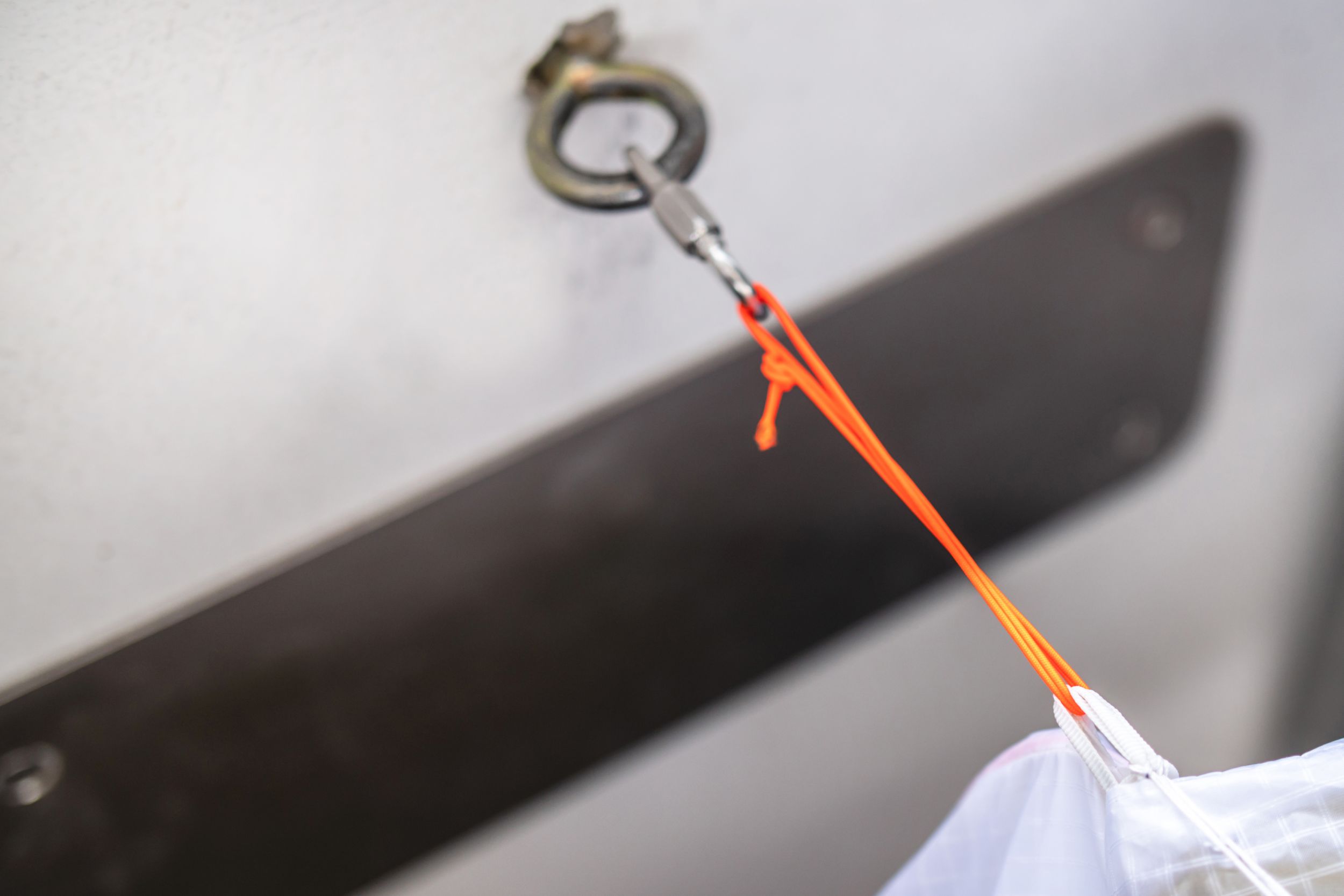 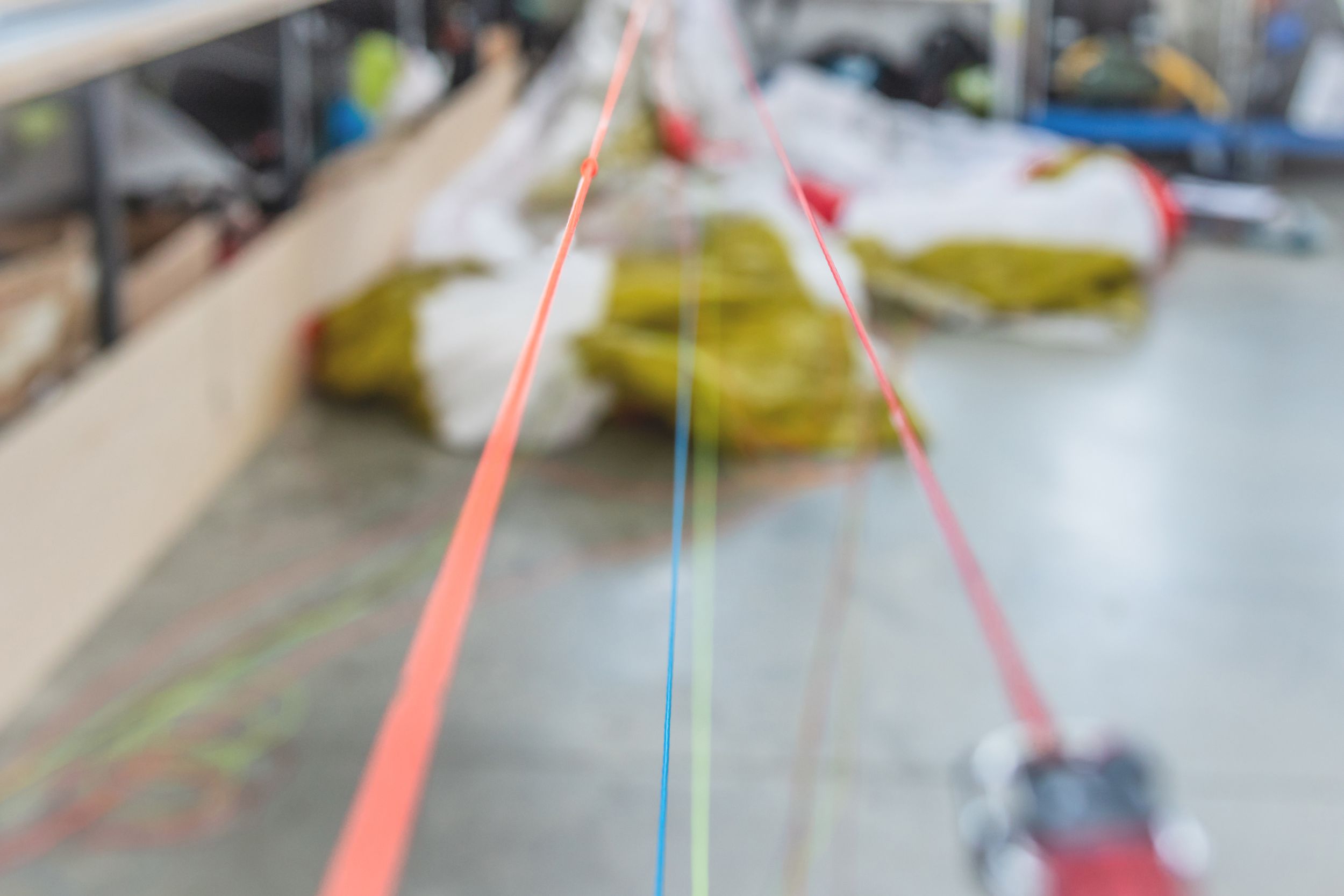 Hold a meterstick at the brake line knot. Measure the difference from the brake line node to the line shackle, where the corresponding A-line line is running and compare it with the nominal length. 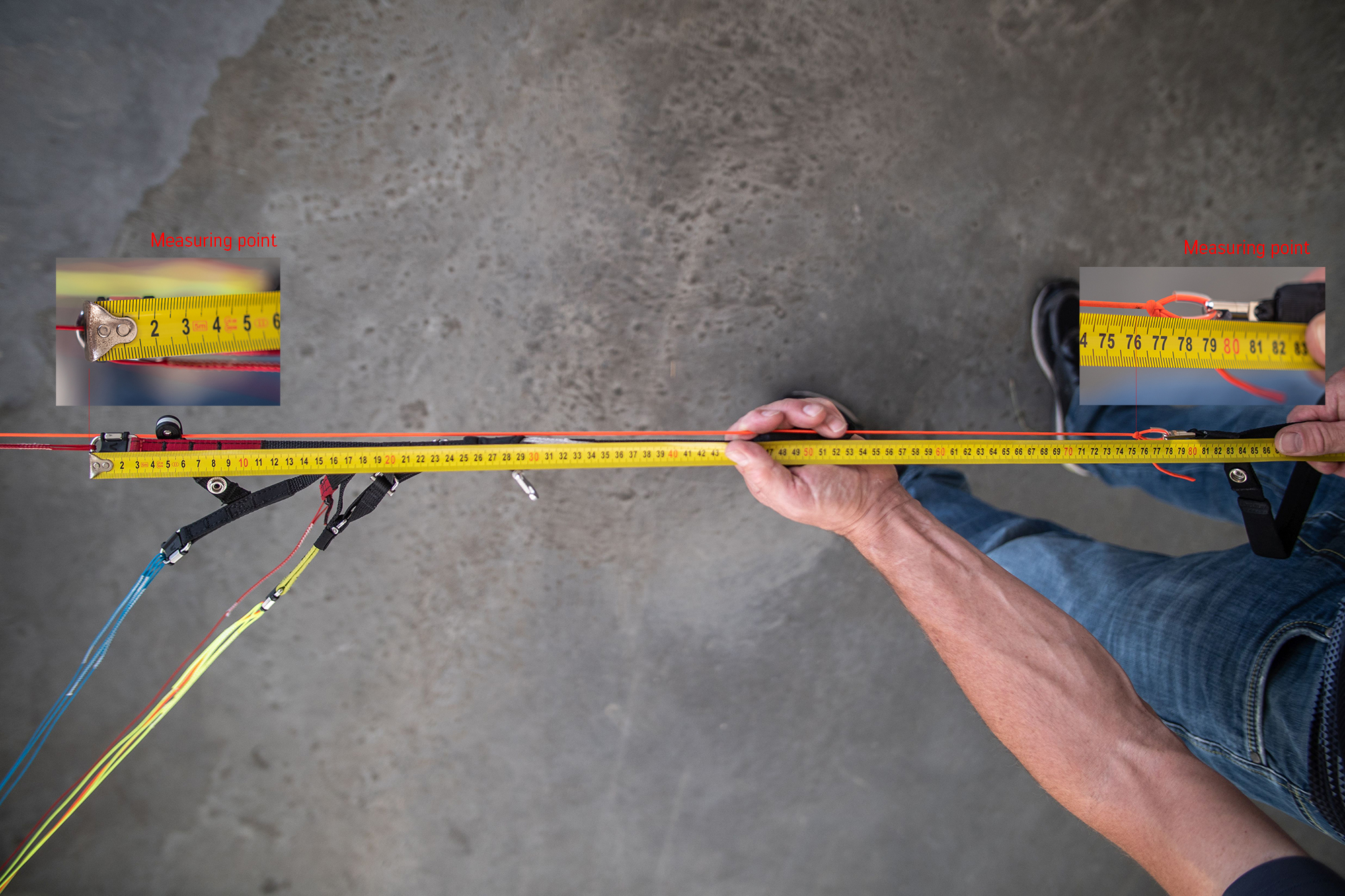 Alternatively, you can first mark the nominal length on the brake line and compare it with the A-line.

A deviation of 2 – 3 cm is not critical. For larger differences, it is necessary to adjust the length of the brake line. The brake line knot must be tied as at the factory. 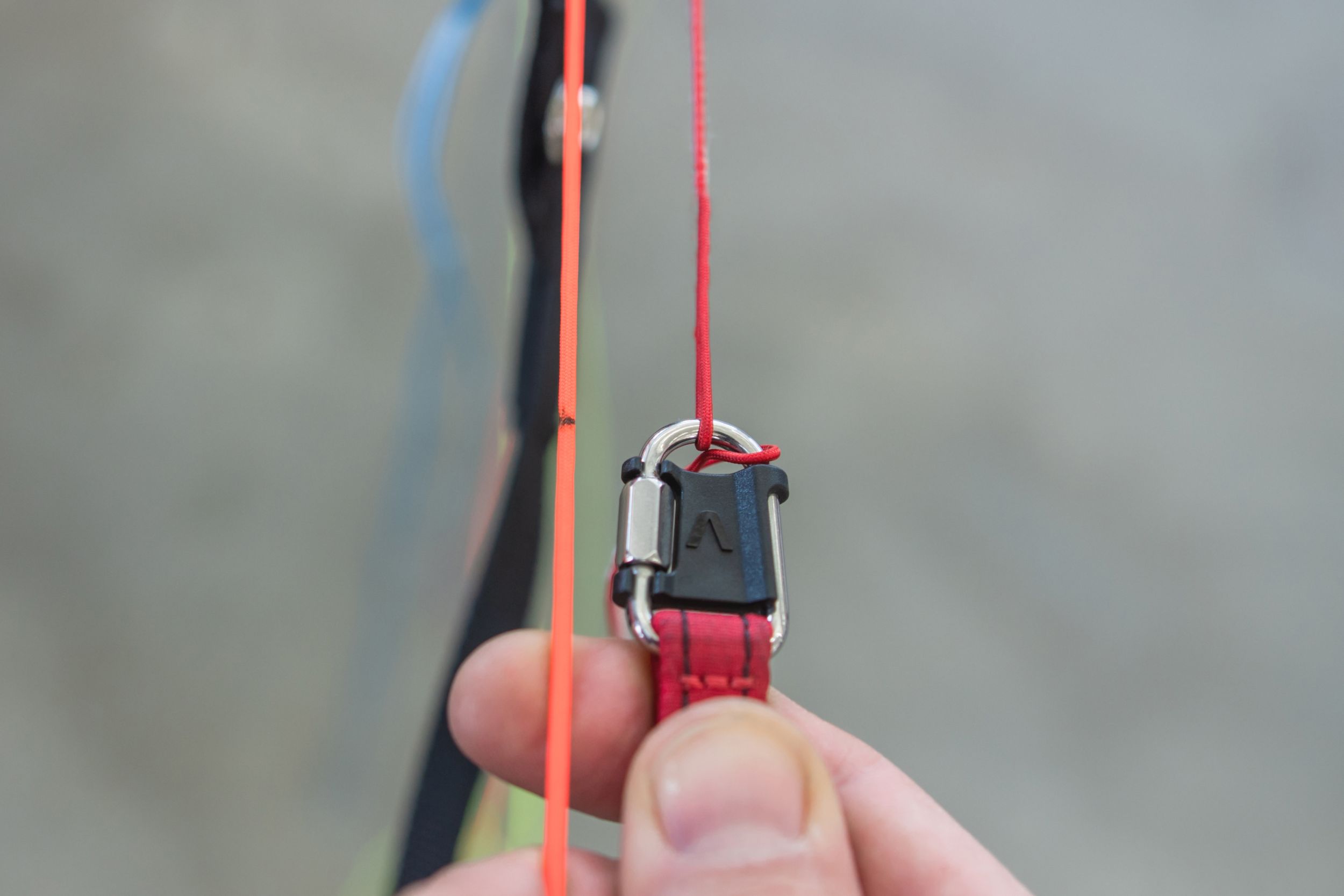 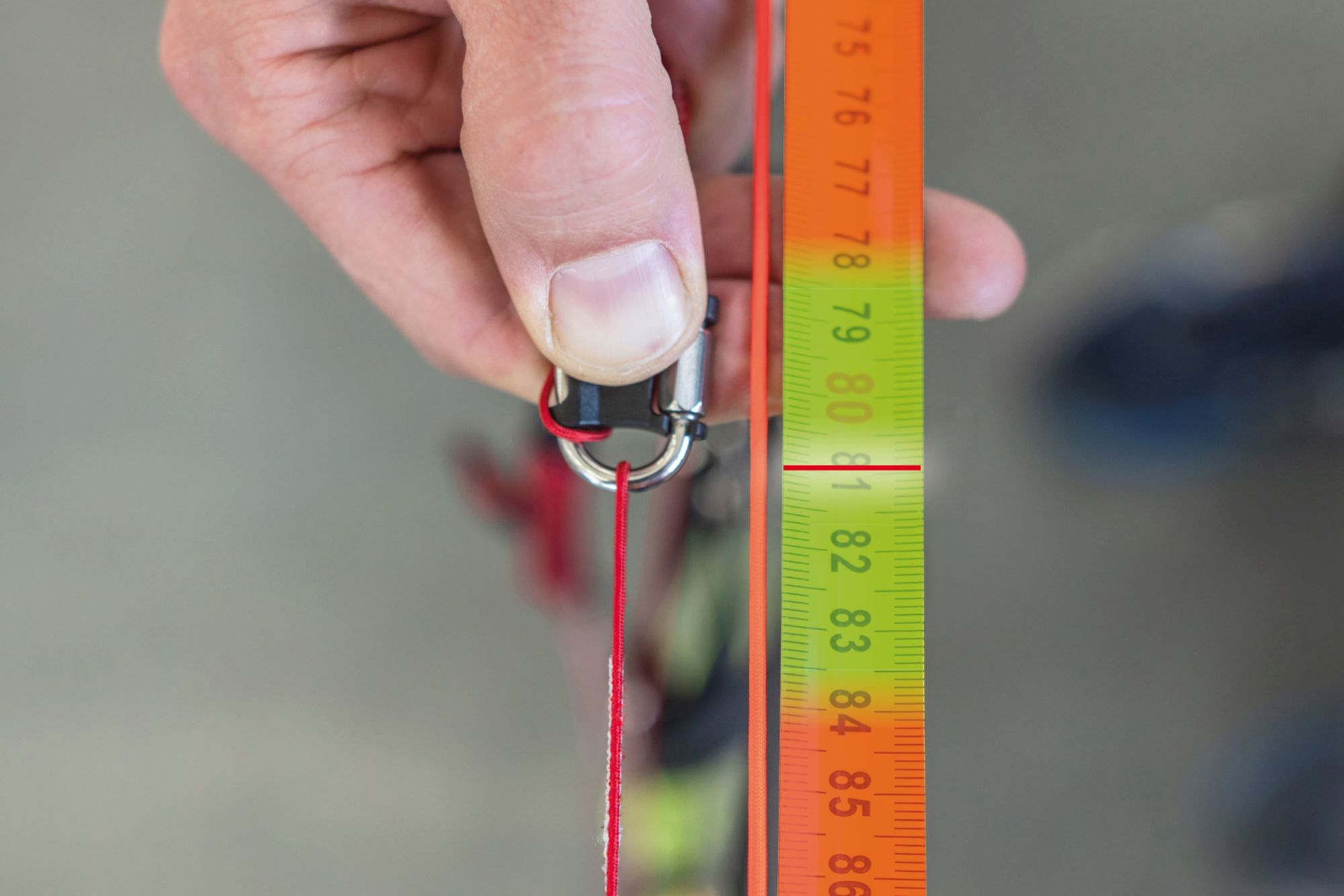 If you have any questions, please contact your personal skywalk dealer!